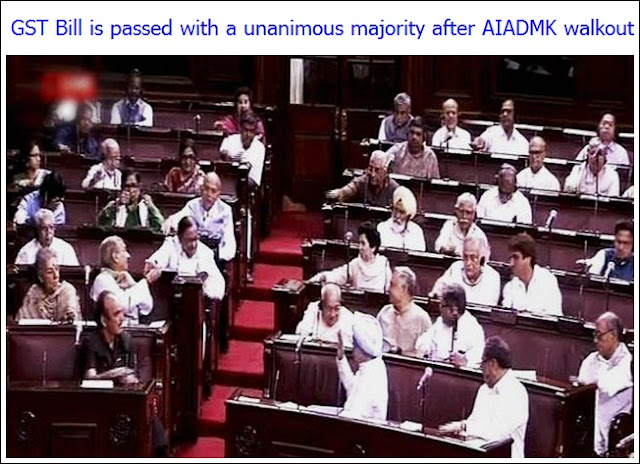 Angshu Mallick, "We are happy that GST is coming. But we are still unclear whether the existing taxes like mandi tax will be merged with GST and there will be a uniform tax. For instance, in Uttar Pradesh there is 2.5 per cent mandi tax and a VAT of 4 per cent. These however, vary from state to state. So we would like to know

Revenue will get a boost: Evasion set to drop - Input tax credit will encourage suppliers to pay taxes - States and Centre will have dual oversight - The number of tax-exempt goods will decline

A common market : It's currently fragmented along state lines, pushing costs up 20-30%

Logistics, inventory costs will fall: Checks at state borders slow movement of trucks. In India, they travel 280 km a day?? compared with 800 km in the US

Make in India :
a) Manufacturing will get more competitive as GST addresses cascading of tax, inter-state tax, high logistics costs and fragmented market
b) Increased protection from imports as GST provides for appropriate countervailing duty

Less developed states get a lift: The current 2% inter-state levy means production is kept within a state. Under the GST national market, this can be dispersed, creating opportunities for others

GDP lift HSBC estimates an 80 basis point rise in GDP growth over 3-5 years. NCAER pegs this at 0.9-1.7% thanks to the elimination of tax cascading

Freeing up online State restrictions and levies have complicated ecommerce. Some sellers do not even ship to particular states. All this will end with GST

Potential Pitfalls Once the Upper House passes the amendment, there's a long way to go and much work to be done before the government's April 1, 2017, deadline can be met. Factors that could trip up GST:

whether mandi tax will be there or not apart from GST."


"Currently there is no tax to procure milk from farmers. We only pay 2 per cent central VAT on sale of milk powder to a company. When GST get implemented the tax can be 12.5 per cent or 15 per cent or 18 per cent. There will be a straight cost hike in milk and milk products prices," he says adding that with state tax from octroi to mandi tax to remain, there was unlikely to be a huge difference. Annual milk production was 160.35 million tonnes during 2015-16 as compared to 146.31 in 2014-15 and  Tea, the second most popular drink after water, needs to be exempted from GST feels the industry. "Tea being a garden produce and coming within the purview of the definition of agriculture as envisaged in the Draft Model GST Law should be exempted from GST. In case full exemption of GST is not possible, GST rate on Tea should be kept on par with the current tax rate of 5 per cent-6 per cent. The present concessional tax rate of 0.5 / 1 per cent for teas sold through auctions be allowed to continue under the GST regime. Otherwise tea will become costlier," says a senior tea industry official. India consumes nearly 950-1000 million kg of tea annually.

> 21:04 (IST Let us make a first draft of the bill, which will have the contribution of eight of your (opposition) ministers and the parliament will have the provision to discuss the bills. I assure you the government has no intention of bypassing a discussion: Arun Jaitley

> 21:00 (IST): What is the harm if honorable finance minister says the GST will be brought as a financial bill? It will give us voting power: Ghulam Nabi Azad

> 20:57 (IST): The Finance Minister, come November, will bring the GST as a Money Bill to bypass a debate like he has done in the past with the Aadhar and Private Members Bill: Jairam Ramesh

> 20:55 (IST): Can't give assurance of a financial bill since the constituents of the bill are not known to me: Arun Jaitley

> 20:52 (IST): In accordance with the precedence, if a bill is a taxing bill, the bill section of the parliament recommends it to be finance bill, otherwise a money bill. We have no intention to bypass the constitution: Arun Jaitely

> 20:49 (IST): P Chidambaram reiterates the demand of a united opposition that the bills under the GST constitutional amendment be brought as finance bills and not money bill

> 20:45 (IST): An effort has to be made to keep the GST at a reasonable rate: Arun Jaitley: The amendment is just to empower to constitute a GST council. The parliament will have the provision to discuss various laws under the GST.
We will work to keep the rate as low as possible.

> 20:39 (IST): BJP's Arun Jaitley's reply to ally Shiv Sena on Entry Tax or OCTROI under GST: A solution within the framework of the GST is workable. The idea is to not stave off the municipal bodies if there's unable to manage funds.

> 20:27 (IST): To P Chidambaram's 'clumsy drafting' of GST, Arun Jaitley evokes BN Rau and BR Ambedkar: The text pointed out is verbatim from BN Rau's draft in the constituent assembly.
The 2011 bill had nothing on how to compensate for losses. That is why there were protests. Let us not make this a Congress vs BJP thing.