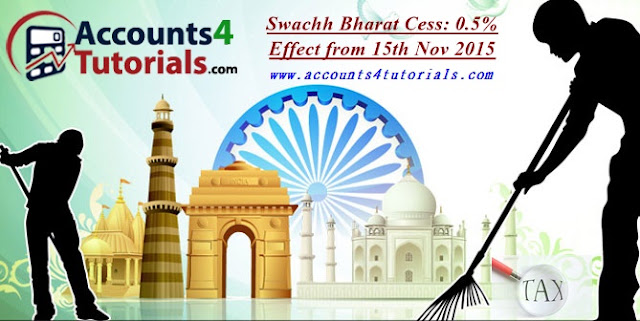 [TO BE PUBLISHED IN THE GAZETTE OF INDIA, EXTRAORDINARY, PART II, SECTION 3, SUB-SECTION (i)]

GOVERNMENT OF INDIA
MINISTRY OF FINANCE
(DEPARTMENT OF REVENUE)

This notification shall come into force from the 15th day of November, 2015.

(K. Kalimuthu)
Under Secretary to the Government of India

PRESS NOTE
In Budget, 2015, a provision was made for levying a Swachh Bharat Cess on all or any of the services, for the purposes of financing and promoting Swachh Bharat initiatives or for any other purpose relating thereto.

We are a country of more than 120 crore people. For such a vast and populous country we do have our fair share of cleanliness concerns. In fact, persons entrusted with the job of keeping our country clean, struggle constantly. Ceanliness also has huge impact on public health. Dirty surrocundings also cause many diseases, like, malaria, dengue, diarrhea, jaundice, cholera etc., with associated high public health expenditure. According to the Government of India estimates, expenditure on health adds up to Rs.6,700 crore annually (approximately Rs.60 per capita). Increased allocation for Swachh Bharat Abhiyan can prevent many of these diseases with consequential benefit to one and all.

Study by American Journal of Tropical Medicine and Hygiene reveals that between 2006 and 2012, India reported an annual average of 20,474 dengue cases, with direct medical cost of about Rs.3500 crore per annum.

Swachh Bharat Cess is not another tax but a step towards involving each and every citizen in making contribution to Swachh Bharat. In this direction, the Government has decided to impose, with effect from 15th November 2015, a Swachh Brarat Cess at the rate of 0.5% on all services, which are presently liable to service tax. This will translate into a tax of 50 paisa only on every one hundred rupees worth of taxable services. The proceeds from this cess will be exclusively used for Swachh Bharat initiatives.