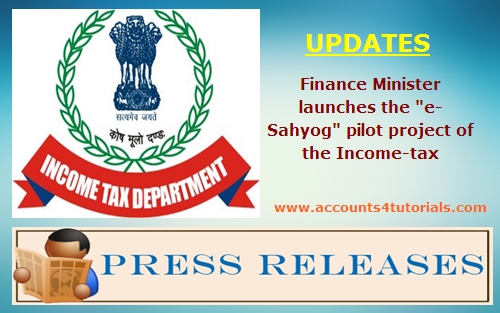 The Income-tax Department is committed to the ‘Digital India’ initiative of the Government of India.The Finance Minister today launched an “e-Sahyog” pilot project which furthers the Department’s commitment to work in an e-environment and reduces the need for the taxpayer to physically appear before tax authorities.

The “e-Sahyog” project launched on a pilot basis, is aimed at reducing compliance cost, especially for small taxpayers. The objective of “e-Sahyog” is to provide an online mechanism to resolve mismatches in Income-tax returns to taxpayers whose returns have not been selected for scrutiny, without visiting the Income Tax Office. Under this initiative the Department will provide an end to end e-service using SMS, e-mails to inform the taxpayers of the mismatch. The taxpayer will simply need to visit the e-filing portal and log in with their user-ID and password to view mismatch related information and submit online response on the issue. The responses submitted online by the taxpayers will be processed and if the response and other information are found satisfactory as per automated closure rules, the issue will be closed. The taxpayer can check the updated status by logging in to the e-filing portal.

The Finance Minister also inaugurated a drive to provide public service by holding “special PAN camps in remote areas”. Under this drive, special PAN camps are being held over two days at forty- three remote semi urban and rural locations across India in the first instance to facilitate obtaining of PAN by persons residing in such areas. The Finance Minister interacted with applicants and officials at seven of these camps through a video conference. More such camps will be held through the year. The camps will ease the burden of compliance for persons residing in remote semi urban and rural areas who wish to enter into transactions of purchase or sale above rupees one lakhand will be required to quote PAN as announced in the Budget speech of 2015-16.

On this occasion, the Finance Minister stated that the objective of the Income Tax Department is to make life as easy as possible for the assessees and difficult only for those who consciously evade taxes. These digital initiatives will help in creating a positive environment.

These initiatives of the Department are expected to significantly reduce the burden of compliance on taxpayers and enhance the taxpayer satisfaction.

Posted by Accounting & Taxation at 6:54 PM