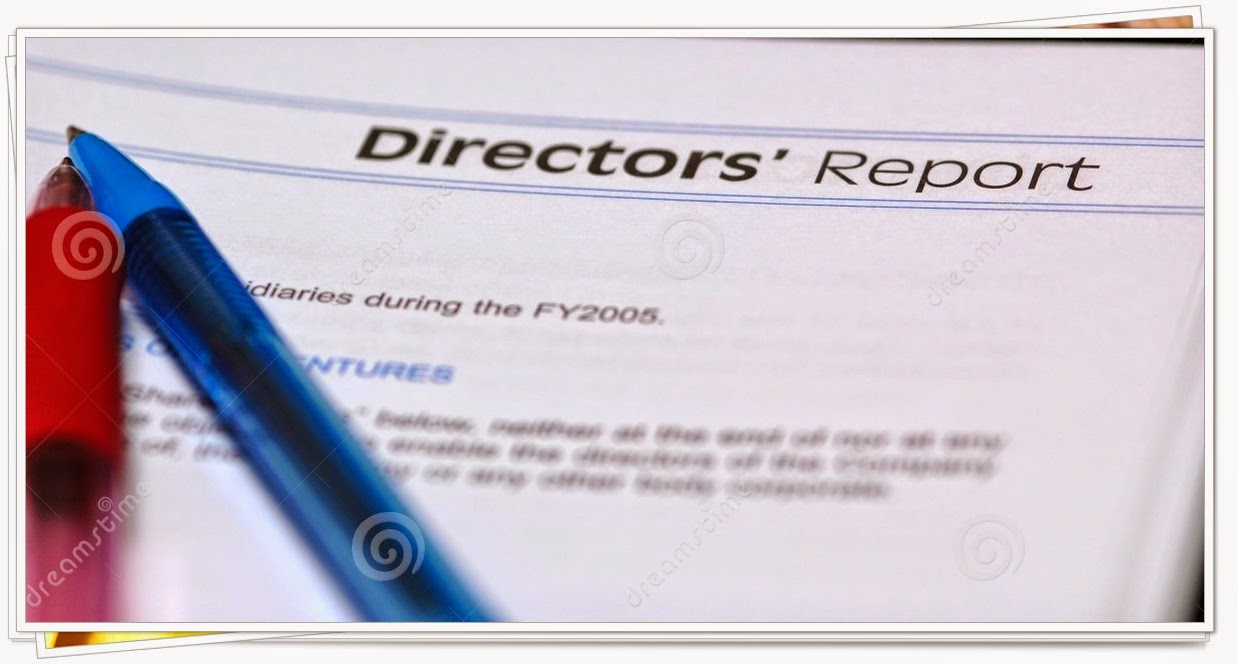 DIRECTOR REPORT COMPANIES ACT, 2013
Report of Board of Directors should be ‘ATTACHED’ to the Balance Sheet laid before the AGM.

A directors’ report is intended to explain to shareholders, the company’s affairs, including its subsidiaries and the nature and scope of company’s business. The report is a summation of activities of the company in the relevant financial year and an idea about possible future developments.

In previous law there was a separate section 217 of the Companies Act, 1956. The whole section was related to the Report of Directors.

But in the Companies Act,2013,a lot of sections make mandate to disclose the facts in The Director Report.

A. Applicability of Provision of Section4134 of Director Report:

The provision of Director Report (u/s 134) is applicable only to financial year commencing on or after 1st April, 2014.

B. Signing of Director’s Report:

As per Section 134(6) Board Report and annexure thereto shall be signed by
C. Basis of Board Report:

But the Board’s Report shall contain a Separate section wherein a report on the performance and financial position of each:
D.Approval of Board Report:

• Approval of Board’s Report shall be done in Meeting of the Board of Director Only. {179(3)}


• Approval of Board’s Report shall not be done by “Circulation Resolution”, or “by Committee”.
{179(3)}
• Meeting of Board of directors can’t be done by “Video Conferencing”.

E filling of Resolution for approving Board report:

The Board resolution for approval of Board Report required being file with ROC in form “MGT-14”within 30 days of passing of Board Resolution.

II. No. of Board Meeting: There is required to mention No. of Board’s Meeting in Director Report

III. Comment on Auditor Report: Explanations or comments by the Board on every qualification, reservation or adverse remark or disclaimer made by auditors in auditor report.

V. Particular of Loan & Investment,Directors: There is required to disclose by director in Board’s Report that, the company have complied with the proviso ions of Section 186 of companies Act, 2013 in relation to Loan, Investment & Guarantee given by the company during the financial.

VI. Disclosure of Related Transaction :
There is required to disclose by director in Board’s Report all the related party transaction entered by the company during financial year.

NATURE OF RELATED PARTY TRANSACTION
For Every Transaction

IX. Risk Management Policy:A statement indicating development and implementation of a risk management policy for the company including identification therein of elements of risk, if any, this in the opinion of the Board may threaten the existence of the company.

But the Board’s Report shall contain a Separate section wherein a report on the performance and financial position of each:

XIV.Disclosure of Board Report: As per Secretarial Standard of ICSI

XV. Disclosure where company is required to constitute Nomination and Remuneration Committee:
The director will disclose in Director Report followings:

XVIII. Disclosure of composition of Audit committee and their recommendations not accepted,
Section - 117(8)

• Details of deposits which are not in compliance with the requirement of chapter V of the Act.
• Deposit Accepted during the year. •
Unpaid and unclaimed deposit at the end of the year.
• If there is any default in repayment of deposit or payment of interest thereon during the year then; Number of such cases and total amount involved

If ESOP has been given, its details are to be disclosed.

XXIV. Statement of affairs of Company: Generally following information is given about current year and pervious year:
XXV. Director Perception of Future of  Company:In this report directors perception of future of company given in consideration of ;
XXVI. Order of Court:
The details of significant and material orders passed by the regulators or courts or tribunals impacting the going concern status and company’s operation in future.


Every listed company shall disclose in the Board’s Report the ratio of the remuneration of each director to the median employee’s remuneration and such other details as may be prescribed. [197(12)]. The disclosures are summarized as below:
XXVIII. Conservation of energy, technology absorption & foreign exchange dealing Rule 8(3)

The report of the Board shall contain the following information and details, namely:
(A) Conservation of energy
(i) the steps taken or impact on conservation of energy;
(ii) the steps taken by the company for utilising alternate sources of energy;
(iii) the capital investment on energy conservation equipments;
(B) Technology absorption
(i) the efforts made towards technology absorption;
(ii) the benefits derived like product improvement, cost reduction, product  development or import substitution;  (iii) in case of imported technology (imported during the last three years reckoned from the beginning of the financial year)
(a) the details of technology imported;
(b) the year of import;
(c) whether the technology been fully absorbed;
(d) if not fully absorbed,areas where absorption has not taken place,and the reasons thereof; and
(iv) the expenditure incurred on Research and Development.
(C) Foreign exchange earnings and Outgo
The Foreign Exchange earned in terms of actual inflows during the year and the Foreign Exchange outgo during the year in terms of actual outflows

By.
GOYAL DIVESH & ASSOCIATES
Posted by Accounting & Taxation at 6:50 PM