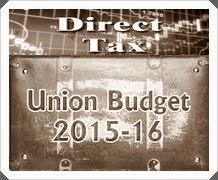 Tax Rates
Deductions from Gross Total Income
Measures to curb black money
General Anti Avoidance Rule (GAAR)
Additional Investment Allowance and provisions in respect of additional depreciation
This deduction shall be available over and above the existing deduction available under section 32AC of the Act.
Definition of charitable purpose
Cost of acquisition in the hands of resulting company
Direct Taxes Code

Currently The Explanation 5 in section 9(1)(i) clarified that an asset or capital asset, being any share or interest in a company or entity registered or incorporated outside India shall be deemed to be situated in India if the share or interest derives, directly or indirectly, its value substantially from the assets located in India.

The share or interest of a foreign company or entity shall be deemed to derive its value substantially from the assets (whether tangible or intangible) located in India, if on the specified date, the value of Indian assets,-
Value of an asset shall mean the fair market value of such asset without reduction of liabilities, if any, in respect of the asset.

The specified date of valuation shall be the date on which the accounting period of the company or entity, as the case may be, ends preceding the date of transfer.

Raising the threshold for specified domestic transaction- Increase in limit of specified domestic transaction from 5 Crores to 20 Crores rupees
Enabling the Board to notify rules for giving foreign tax credit - Rules will be prescribed to claim foreign tax credit u/s 90, 90A and 91
Clarity regarding source rule in respect of interest received by the non-resident in certain cases
Amendment to the conditions for determining residency status in respect of Companies
Rationalisation of provisions relating to Tax Deduction at Source (TDS) and Tax Collection at Source (TCS) - Penalty of 1 lakh proposed for providing incorrect information or non-providing of information as per 195(6)