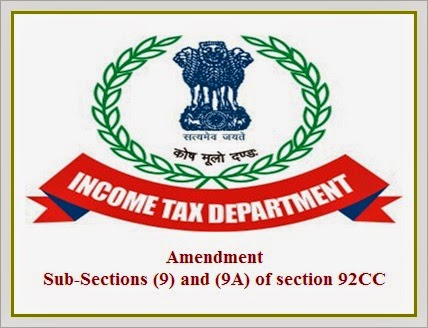 (f) after rule 10 M, the following rule shall be inserted, namely:-

“Roll Back of the Agreement.

10 MA. (1) Subject to the provisions of this rule, the agreement may provide for determining the arm’s length price or specify the manner in which arm’s length price shall be determined in relation to the international transaction entered into by the person during the rollback year (hereinafter referred to as “rollback provision”).

(2) The agreement shall contain rollback provision in respect of an international transaction subject to the following, namely:-

(3) Notwithstanding anything contained in sub-rule (2), rollback provision shall not be provided in respect of an international transaction for a rollback year, if,-

(4) Where the rollback provision specifies the manner in which arm’s length price shall be determined in relation to an international transaction undertaken in any rollback year then such manner shall be the same as the manner which has been agreed to be provided for determination of arm’s length price of the same international transaction to be undertaken in any previous year to which the agreement applies, not being a rollback year.

(5) The applicant may, if he desires to enter into an agreement with rollback provision, furnish along with the application, the request for the same in Form
No. 3 CEDA with proof of payment of an additional fee of five lakh rupees:

Provided that in a case where an application has been filed prior to the 1st day of January, 2015, Form No. 3CEDA along with proof of payment of additional fee may be filed at any time on or before the 31st day of March,

2015 or the date of entering into the agreement whichever is earlier:

Provided further that in a case where an agreement has been entered into before the 1st day of January, 2015, Form No. 3CEDA along with proof of payment of additional fee may be filed at any time on or before the 31st day of March, 2015 and, notwithstanding anything contained in rule 10 Q, the agreement may be revised to provide for rollback provision in the said agreement in accordance with this rule.”;

(h)after rule 10 R, the following rule shall be inserted, namely:-

“Procedure for giving effect to rollback provision of an Agreement.

10 RA.
(1) The effect to the rollback provisions of an agreement shall be given in accordance with this rule.

(2) The applicant shall furnish modified return of income referred to in section 92CD in respect of a rollback year to which the agreement applies along with the proof of payment of any additional tax arising as a consequence of and computed in accordance with the rollback provision.

(4) If any appeal filed by the applicant is pending before the Commissioner (Appeals), Appellate Tribunal or the High Court for a rollback year, on the issue which is the subject matter of the rollback provision for that year, the said appeal to the extent of the subject covered under the agreement shall be withdrawn by the applicant before furnishing the modified return for the said year.

(6) The applicant, the Assessing Officer or the Principal Commissioner or the Commissioner, shall inform the Dispute Resolution Panel or the Commissioner (Appeals) or the Appellate Tribunal or the High Court, as the case may be, the fact of an agreement containing rollback provision having been entered into along with a copy of the same as soon as it is practicable to do so.

(7) In case effect cannot be given to the rollback provision of an agreement in accordance with this rule, for any rollback year to which it applies, on account of failure on the part of applicant, the agreement shall be cancelled.”;

(i) in Appendix-II of the principal rules,-

(A) in Form No. 3CEC, in item 10, after the words, “Number of years for which APA is proposed to be applied”, the words “including the rollback years” shall be inserted;

“f. whether any rollback request is being Yes/No
made .
g. If yes, enclose copy of
relevant Form No. 3CEDA.”;

(C) after Form No. 3CED, following Form shall be inserted, namely: -


“Form No. 3 CEDA
(See sub-rule (5) of rule 10 MA)
Application for rollback of an Advance Pricing Agreement

This is to state that.............................. (Name of the Applicant)......wishes to negotiate an APA with the Central Board of Direct Taxes containing rollback provision. I am submitting herewith the necessary particulars hereunder:


1. Particulars of the applicant:

(a) Full name of the applicant:
(b) Permanent Account Number:
(c) Address of the applicant:
(d) Address for communication:
(e) Location(s) of the business enterprises
in India:
(f) Email id and the contact numbers of the
person with whom correspondence is
required to be made:
(g) Names and designation of the
authorised representatives who would
be appearing before the authorities for
negotiations of the APA:

2.Whether pre-filing discussions in respect of
rollback were sought by the applicant? If yes,
please furnish:

3.Whether application in Form 3CED is being
filed simultaneously:

4.Details of international transaction(s) including
Name(s) of the Associated Enterprises in
respect of which rollback is requested for:

5.Whether the international transaction(s) is the
same as that in respect of which APA request
is being made in Form 3CED by the applicant:

6.Particulars of additional Fee paid by the applicant:          Amount in Rs.
Challan No: Dated:

7.The details of previous years for which rollback
is being sought:

8.Has the same international transaction been undertaken
in any other year for which rollback is permissible but the
same is not being requested for. If yes, the reasons for the
same be provided:

9.Period of APA proposed along with the date
from which APA is sought to be made applicable
in the application in Form 3CED:

11.If yes, provide details including acknowledgement No.,
date of furnishing etc.


13. If yes, provide details including date of furnishing etc.

14. Details of pending proceedings including appeals for
the years mentioned in 7 above in respect of international
transaction(s) mentioned in 4 above :

15. Whether Appellate Tribunal has disposed of
any appeal in respect of international
transaction mentioned in 4 above for any of the
years mentioned in 7 above? if yes, then details
may be provided:

I declare that the information furnished in the application is correct and truly stated.

Posted by Accounting & Taxation at 6:47 PM