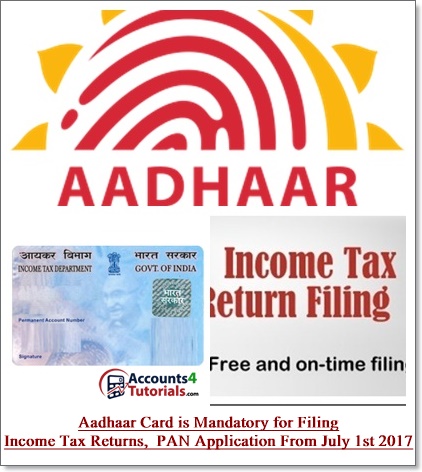 Finally the effect of the supreme court judgement is as following

1. Honourable Supreme Court in its landmark judgement has upheld Section 139AA of the Income Tax Act as constitutionally valid which required quoting of the Aadhaar number in applying for PAN as well as for filing of income tax returns.

2. The Court also held that the “Parliament was fully competent to enact Section 139AA of the Act and its authority to make this law was not diluted by the orders of this Court.” Therefore, no violation of the earlier Supreme Court orders were found in enacting the provision.

3. The Court has also held that Section 139AA of the Act is not discriminatory nor it offends equality clause enshrined in Article 14 of the Constitution.

4. Section 139AA is also not violative of Article 19(1)(g) of the Constitution in so far as it mandates giving of Aadhaar number for applying PAN and in the income tax returns and linking PAN with Aadhaar number.

5. Section 139AA(1) of the Income Tax Act as introduced by the Finance Act, 2017 provides for mandatory quoting of Aadhaar/Enrolment ID of Aadhaar application form, for filing of return of income and for making an application for allotment of PAN with effect from 1st July, 2017.

7. The Supreme Court has upheld Section 139AA(1) which mandatorily requires quoting of Aadhaar for new PAN applications as well as for filing of returns.

8. The Supreme Court has also upheld Section 139AA(2) which requires that the Aadhaar number must be intimated to the prescribed authority for the purpose of linking with PAN.

“125. Having said so, it becomes clear from the aforesaid discussion that those who are not PAN holders, while applying for PAN, they are required to give Aadhaar number. This is the stipulation of sub- section (1) of Section 139AA, which we have already upheld. At the same time, as far as existing PAN holders are concerned, since the impugned provisions are yet to be considered on the touchstone of Article 21 of the Constitution, including on the debate around Right to Privacy and human dignity, etc. as limbs of Article 21, we are of the opinion that till the aforesaid aspect of Article 21 is decided by the Constitution Bench a partial stay of the aforesaid proviso is necessary. Those who have already enrolled themselves under Aadhaar scheme would comply with the requirement of sub-section (2) of Section 139AA of the Act. Those who still want to enrol are free to do so. However, those assessees who are not Aadhaar card holders and do not comply with the provision of Section 139(2), their PAN cards be not treated as invalid for the time being. It is only to facilitate other transactions which are mentioned in Rule 114B of the Rules. We are adopting this course of action for more than one reason. We are saying so because of very severe consequences that entail in not adhering to the requirement of sub-section (2) of Section 139AA of the Act. A person who is holder of PAN and if his PAN is invalidated, he is bound to suffer immensely in his day to day dealings, which situation should be avoided till the Constitution Bench authoritatively determines the argument of Article 21 of the Constitution. Since we are adopting this course of action, in the interregnum, it would be permissible for the Parliament to consider as to whether there is a need to tone down the effect of the said proviso by limiting the consequences.”