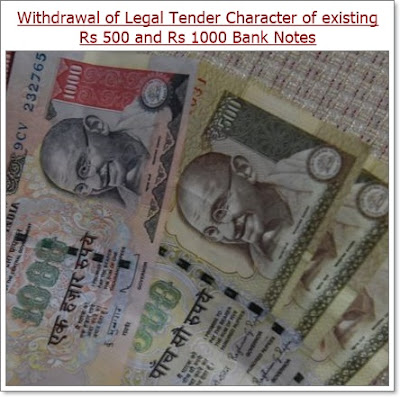 1. Withdrawal of Legal Tender Character of existing ₹ 500/- and ₹ 1000/- Bank Notes
In terms of Gazette Notification No 2652 dated November 08, 2016 issued by Government of India, ₹ 500 and ₹ 1000 denominations of Bank Notes of the existing series issued by Reserve Bank of India (hereinafter referred to as Specified Bank Notes) shall cease to be legal tender with effect from 9th November, 2016, to the extent specified in the Notification. A new series of Bank Notes called Mahatma Gandhi (New) Series having different size and design, highlighting the cultural heritage and scientific achievements of the country, will be issued. Bank branches will be the primary agencies through which the members of public and other entities will be exchanging the Specified Bank Notes for Bank Notes in other valid denominations or depositing the Specified Bank Notes for crediting to their accounts, upto and including the December 30, 2016. Therefore, banks have to accord highest priority to this work.

In order to enable the members of public and other entities to exchange their existing ₹ 500/- and ₹ 1000/- notes, the following arrangements have to be made by the banks.

2. Action to be taken on November 09, 2016
i) November 09, 2016 (Wednesday) shall be a non-business working day for all banks. However, branches will function on that day to carry out preparations for implementing the scheme as per this circular.

ii) The Specified Bank Notes stocked in ATMs, Cash Deposit Machines, Cash Recyclers, Coin Vending Machines, any other cash dispensing/receiving machine, CIT Companies and Business Correspondents attached to the branch will have to be called back forthwith. The sponsor banks of White Label ATMs will be responsible for recalling the Specified Bank Notes from the White Label ATMs sponsored by them.

iv) All ATMs, Cash Deposit Machines, Cash Recyclers and any other machine used for receipt and payment of cash shall be shut on 9th and 10th November, 2016.

v) All ATMs and cash dispensing machines will have to be re-configured to disburse bank notes of ₹ 100/- and ₹ 50/- denominations prior to reactivation of the machines on 11th November, 2016; however banks should await separate instructions from Reserve Bank of India on issuing Mahatma Gandhi (New) series Notes through ATMs and cash dispensing machines though they can be issued over the counters from Nov 9, 2016.

vi) Every banking company defined under the Banking Regulation Act, 1949 and every Treasury shall complete and forward a return in the format specified in Annex-1 showing the details of the Specified Bank Notes held by it at the close of business as on 8th November 2016, not later than 13:00 hrs on November 10, 2016 to the concerned Regional Office of Reserve Bank of India under whose jurisdiction the Head office of the bank is located. The return should also include details of Specified Bank Notes recalled from ATMs, Cash Deposit Machines, Cash Recyclers, Coin Vending Machines, CIT Companies, Business Correspondents, etc.

vii) Arrangement should be made by the branches to promptly deposit these Specified Bank Notes with the linked currency chest / RBI and get the amount credited to their account.

viii) Branches should estimate their cash requirement and obtain from the linked / nearby currency chest /RBI Bank Notes of other valid denominations.

x) Information Material for educating the public regarding withdrawal of Legal Tender character of the Specified Bank Notes (as per Annex-2 and salient features of the Mahatma Gandhi (New) Series Bank Notes (Annex-3) are required to be printed/copied in adequate quantity and distributed to the public / displayed in the banking hall / ATM kiosks.

xii) Banks should provide adequate number of note counting machines, UV Lamps, note sorting machines etc. at their counters to take care of the work load and timely detection of counterfeit notes. As already advised vide our circular No DCM (FNVD) No.1134/16.01.05/2016-17 dated October 27, 2016, the banking hall, public areas and counters should be under CCTV surveillance and recording should be preserved.

b. Banks have to accord top priority to provide facility for exchanging / accepting deposits of Specified Bank Notes and open additional counters to meet the public demand and keep the counters open for extended hours, if necessary. Maximum staff should be deployed for this purpose. If necessary banks may consider hiring retired employees for a temporary period to take care of additional work load.

c. Provision of Exchange Facility:
The specified bank notes held by a person other than a banking company referred to in sub-paragraph (1) of paragraph 1 or Government Treasury may be exchanged at any Issue Office of the Reserve Bank or any branch of public sector banks, private sector banks, foreign banks, Regional Rural Banks, Urban Cooperative Banks and State Cooperative Banks for a period up to and including the 30th December, 2016, subject to the following conditions, namely:—

(i) the specified bank notes of aggregate value of ₹ 4,000/- or below may be exchanged for any denomination of bank notes having legal tender character, with a requisition slip in the format specified by the Reserve Bank and proof of identity; the limit of ₹ 4,000/- for exchanging specified bank notes shall be reviewed after fifteen days from the date of commencement of this notification and appropriate orders may be issued, where necessary;

(iv) The equivalent value of specified bank notes tendered may be credited to an account maintained by the tenderer at any bank in accordance with standard banking procedure and on production of valid proof of Identity;

(v) the equivalent value of specified bank notes tendered may be credited to a third party account, provided specific authorisation therefor accorded by the third party is presented to the bank, following standard banking procedure and on production of valid proof of identity of the person actually tendering, as indicated in Annex-5;

(vi) cash withdrawal from a bank account over the counter shall be restricted to ₹ 10,000/- per day subject to an overall limit of ₹ 20,000/- a week from the date of the notification until the end of business hours on 24th November, 2016, after which these limits shall be reviewed;

(vii) there shall be no restriction on the use of any non-cash method of operating the account of a person including cheques, demand drafts, credit or debit cards, mobile wallets and electronic fund transfer mechanisms or the like;

(ix) any person who is unable to exchange or deposit the specified bank notes in their bank accounts on or before the 30th December, 2016, shall be given an opportunity to do so at specified offices of the Reserve Bank or such other facility until a later date as may be specified by it.

(x) Business Correspondents (BCs) may also be allowed to exchange Specified Bank Notes upto ₹ 4000/- per person as in the case of bank branches, against valid identity proof and requisition slip. For this purpose banks may, at their discretion, enhance the cash holding limits of BCs at least till December 30, 2016.

4. Reporting Mechanism
Each bank branch exchanging Bank Notes in the denominations of ₹ 500/- and ₹ 1,000/- shall report at the close of business on each day starting from November 10, 2016 till the closure of the scheme on December 30, 2016 (or till any other date thereafter as may be advised by RBI) by email or Fax to their Controlling Office a statement as per Annex-6 showing the details of Specified Bank Notes exchanged by it and the respective Controlling Offices will aggregate these as per Annex-6A and report to the Department of Currency Management, RBI, Central Office by email on a daily basis.

5. Banks may issue detailed instructions to their branches advising them to strictly adhere to the norms of the scheme and procedures laid down above. The staff at the branch level, particularly the tellers, should be adequately sensitized. For this purpose, information as available at our website (www.rbi.org.in) and Government of India website may be used. Staff should familiarise themselves with the FAQs (as per Annex-4).

6. Banks should make copies of information material (As available at Annex-2, Annex-3 and Annex-4) and distribute these to the public.

7. Bank should issue instructions to BCs, ATM Switch Operators and CIT Companies on various aspects of the above scheme relevant to them.

8. Banks should monitor the implementation of the scheme on a day to day basis through a monitoring cell headed by an Officer not below the rank of a General Manager, who will act as a Nodal Officer. The Contact details of the Nodal officer will be reported to the concerned Regional Office of RBI, with a copy to RBI Central Office, Mumbai through email as indicated below.

9. RBI has opened a Control Room at its Central Office for monitoring the progress and providing guidance to banks and members of public. The email id and telephone numbers of the Control room are as under: