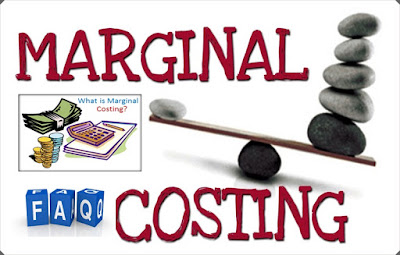 2. Marginal Cost:- it is increamental change in variable cost if the volume of output is increased by one unit. Practically, this is measured by the total variable cost attributable to one unit. Marginal cost can is the sum of prime cost and variable overhead as follows

3. Direct Costing: it is the practice of charging all direct cost to products and all indirect costs is written off against profits in the period in which they arise. Under direct costing, the stocks are valued at direct costs whether fixed or variable which is directly attributable to the cost units.

4. Differential cost:- it is the difference between total cost of 2 alternatives. It is determined to choose the best cost effective alternative. Thus it includes fixed and semi-variable cost also.it represent an increase or decrease in total cost resulting out of:

Under contribution concept, fixed cost is considered as period cost which cannot be suitably apportioned between products. It serves as a measure of efficiency of operations of various segments or products of a business entity. It helps management in following ways:-


6. Key Factor / Limiting Factor: it is a factor which at a particular time or over aperiod limits the activities of an undertaking. Examples of Key Factors or Limiting Factors are:
7. Cost Volume Profit Analysis:- As the name suggests, cost volume profit (CVP) analysis is the analysis of three variables cost, volume and profit. Such an analysis explores the relationship between costs, revenue, activity levels and the resulting profit. It aims at measuring variations in cost and volume.

1. Changes in the levels of revenues and costs arise only because of changes in the number of product or services units produced and sold.
2. Total costs can be separated into two components; fixed cost which does not vary with level of output and variable cost which varies with level of output. variable costs include both direct variable costs and indirect variable costs of a product. Similarly, fixed costs include both direct fixed costs and indirect fixed costs of a product.
3. When represented graphically, the behaviours of total revenues and total costs are linear in relation to output level within a relevant range and time period.
4. Selling price per unit, variable cost per unit, and total fixed costs are constant.
5. All revenues and costs can be added, subtracted, and compared without taking into account the time value of money.

Importance :- It provides the information about the following matters:
1.The behave of cost in relation to level of activity.
2. Volume of production or sales, where the business will break-even.
3. Relation of profits to variation in level of output.
4. Amount of profit for a projected sales volume.
5. Quantity of production and sales for a target profit level.

Impact of various changes on profit:
An understanding of CVP analysis is extremely useful to management in budgeting and profit planning. It depicts the impact of the following on the net profit:

By transposition, we have derived the following equations:

9. Break Even Point (B.E.P):- it refers to that level of sales activity at which there shall be no profit or no loss. Hence total cost shall be equal to total revenue. It is the minimum level of sales required to avoid loss to firm. It is calculated as follows:-

10. Margin of Safety:- The margin of safety can be defined as the difference between the expected level of sale and the breakeven sales. The larger the margin of safety, the higher is the chances of making profits. It can be calculated as follows

Margin of safety shall be NIL when actual sales is equal to breakeven sales level.
It can also be calculated as follows:-

11. Angle of incidence:- At break even chart, this angle is formed at intersection of total sales line and total cost line. This angle shows the rate at which profits are being earned once the break -even point has been reached. The wider the angle the greater is the rate of earning profits. A large angle of incidence with a high margin of safety indicates extremely favourable position.

Ans. The main characteristics of marginal costing are as follows:

Ans. Practical application of marginal costing are as follows:-

Q.6 Explain meaning of margin of safety? State the relationship between MOS ratio and operating leverage? MOS is the excess of actual total sales over break even sales. ?

MOS is the excess of actual total sales over break even sales.

If sales are expected to increase, lower operating leverage will result in higher profit and vice-versa.

High variable cost and low fixed cost results in higher MOS and thus risk will be lower and vice-versa.So like operating leverage, MOS is measure of risk as to what extent an organisation is exposed to change in sales.


Purushottam Aggarwal
Mobile No. – 95 8280 8296
(for any query)
Face to Face Classes in Laxmi Nagar
Satelite Classes all over India

Posted by Accounting & Taxation at 5:43 PM