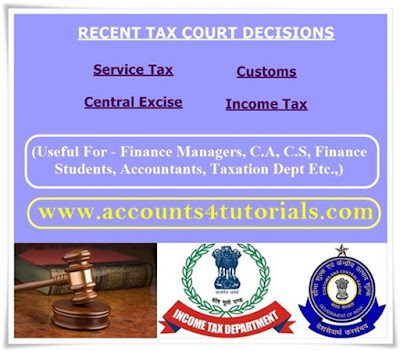 If service tax returns have been filed u/s 70 and taxes have been paid then no Best judgement assessment can be made under Section 72.

COMMENTS: In the above case, the appellant has filed their return regularly under section 70 of the Act. For the assessment of tax, he specifically asked the department to tell what information they require to issue the show cause notice, however, he was not informed by the department of the required information which hampered the determination of service tax liability.

In the absence of any document, the show cause notice is only on the basis of assumption and presumption i.e. SCN is deficient and not maintainable. Therefore, provision of Section 72(b) is not attracted and no Best judgement assessment can be made.
[Decided in favour of the assessee]

BRIEF: Buying & selling Lottery Tickets is not rendering service to the State and hence not liable to service tax

COMMENTS: In the above case, the appellants are engaged in selling the lottery tickets online organised by the Government of Sikkim. Service tax under reverse charge was imposed on them vide Notification No.7/2015-ST dated 01-03-2015, Annexure P4, in WP(C) No.39 of 2015. Also, Sub-Rule (7C) of Rule 6 was imposed.

It held that Buying & selling Lottery Tickets is not rendering service to the State and hence does not fall within the meaning of 'service' under Clauses (31A) and (44) of Section 65B and outside the purview of Explanation 2 to the said Section.

Also, Rule 6(7C) of Service Tax Rules only provides an optional composition scheme for payment of service tax which by itself does not create a charge of service tax. As regards the amendments carried out by Finance Act 2015, it was held to be made to overcome the decisions of The Court in the Future Gaming Case without removing the cause of invalidity of the Tax on buying & selling of lottery tickets. On the question of Reverse charge introduced on selling or marketing agents of lottery tickets, vide N No. 7/2015 dated 1.3.2015, is was held to be clearly unsustainable and liable to be struck down.
[Decided in favour of the assessee]

BRIEF: If Tribunal decides the stay application ex-parte before granting three adjournments on the ground that Appellants have adopted dilatory tactics by not appearing and thereby the law, the action of the Tribunal would be too harsh.

COMMENTS: The Tribunal during the adjudication passed an ex-parte order confirming the demand on assessee. The assessee filed appeal and stay petition, then sought adjournment by filing request letter before the date of hearing on stay application. Tribunal granted an adjournment without even taking into account the said request letter on record. On occasion of second adjournment request letter by the assessee, Tribunal overlooked the letter and passed an ex-parte stay order. The assessee challenged the said ex-parte order before the High Court stating that tribunal is entitled to grant three adjournments to a particular party as per proviso to section 35C of the Central Excise Act.

The Hon'ble High Court held that Tribual’s action of deciding the stay petition ex-parte on second adjournment i.e. before granting three adjournments as per proviso to section 35C of the Central Excise Act and that too ignoring the assessee request for an adjournment terming non-appearance as abuse to process of law is too harsh. Accordingly, the case was remanded for reconsideration and the Court directed assessee not to seek adjournment on the next date. [Decided in favour of the assessee]

BRIEF: Suo moto credit can be taken if duty is paid twice as excess duty paid is not a duty but deposit.

COMMENTS: In the above case, the assessee paid duty twice and then took suo moto Cenvat credit of the same which was denied. The assessee filed an appeal against the impugned order which demanded duty along with the interest and penalty.

The Hon’ble CESTAT held that although there is no provision to take suo moto credit under section 11B of the Act, it is only a procedural lapse and for that Cenvat credit cannot be denied. Hence, it held that the assessee has correctly taken suo moto credit of the duty paid twice. The impugned order was set aside.
[Decided in favour of the assessee]

BRIEF: The assessee is entitled for interest on SAD refund on the occasion of delay in processing the refund claim.

From Section 3(8) of the CTA and Sections 27 and 27A of the Act it becomes clear that refunds and interest on delayed refunds, would equally apply to refund of SAD u/s 3 of the CTA. However, the Department denied interest to the Respondent  resorting the para 4.3 of the CBEC’s Circular No.6/2008. Circular No.6/2008 to the extent it denies SAD refund, in terms of Notification No. 102/2007, interest on such refund in terms of Section 27A of the Act, is inconsistent with and ultra vires Section 27A of the Act.

Hence, The Hon’ble High Court held that the action  of the Department was incorrect and no error was committed by CESTAT in ordering interest on the amount of SAD refunded, in terms of Section 27A of the Act.
[Decided in favour of the assessee]

BRIEF: 54F is a beneficial provision & must be interpreted liberally. It does not require that the construction of the new residential house has to be completed, and the house be habitable, within 3 years of the transfer of the old asset. It is sufficient if the funds are invested in the new house property within the time limit

COMMENTS: In the above case, the assessee sold a property on 06.10.2008 and purchased another residential plot on 13.10.2008 and. On 02.06.2010 she obtained approval of the building plan from the local authority and commenced the construction.

The assessee claimed deduction u/s 54F towards the benefit of Long Term capital gain. However, the assessing officer rejected the claim of the assessee as the construction stands incomplete as on 05.10.2011 i.e. within 3 years from the date of sale of first property.

The CIT(A)  and  Tribunal  upheld  the  decision  in Commissioner of Income Tax Vs Sambandam Udaykumar reported in (2012) 81 CCH 0151 where it was held that 54F has to be construed liberally for achieving the purpose of its incorporation and allowed the appeal of assessee. The Department then appealed before High Court.

Hence, if the assessee is able to establish the same, the assessee would be entitled to get the benefit of Section 54F of the Act.
[Decided against Revenue]