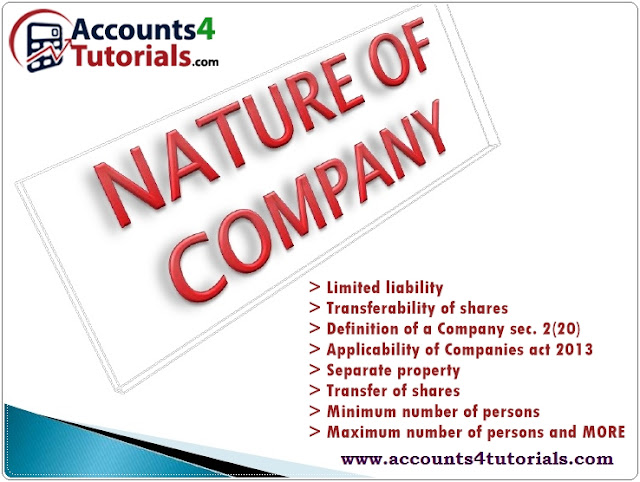 Meaning of Company
It’s a formal organization of conducting business, and can be formed, continues and ends by following the law.

An incorporated company owes its existence either to a special Act of Parliament or to company law. Public corporations like Life Insurance Corporation of India, SBI etc., have been brought into existence through special Acts of Parliament, whereas companies like Tata Steel Ltd., Reliance Industries Limited have been formed under the Company law i.e. Companies Act, 1956 which is being replaced by the Companies Act, 2013.

An association formed not for profit also acquires a corporate character and falls within the meaning of a company by reason of a license issued under Section 8(1) of the Act.

CHARACTERISTICS OR FEATURES OF COMPANY
Section 9
From the date of incorporation mentioned in the certificate of incorporation, such subscribers to the memorandum and all other persons, as may, from time to time, become members of the company, shall be a body corporate by the name contained in the memorandum, capable of exercising all the functions of an incorporated company under this Act and having perpetual succession with power to acquire, hold and dispose of property, both movable and immovable, tangible and intangible, to contract and to sue and be sued, by the said name.

1. Incorporated association: A company is formed and registered under the companies Act. Registrations of a company are done by complying with the prescribed formalities prescribed under the Act.

7.  Separation of ownership from management

9. Capacity to sue and be sued

- Inability to pay debts by the company in liquidation. In the course of business, the company borrowed from creditors to the extent of £ 7,000. Due to trade depression, the company ran into financial difficulties and eventually went into liquidation. The assets realized only £ 6,000.
Since Salomon was a secured creditor, he made a claim on the amount with the company.
- Contention of unsecured creditors – one man cannot owe money to himself. The unsecured creditors contended that Salomon was carrying on business in the name of Salomon & Co. Ltd. Thus, Salomon and Co. Ltd. was a mere agent for S.
- Decision of the Court. It was held that Salomon & Co. was a real company fulfilling all legal requirements. It had an identity different from its members, and therefore, the secured debentures were to be paid in priority to unsecured creditors.
Implications of the Rule of ‘separate legal entity’

- There can be a transfer of property from a member to the company and vice-versa.
- A person can be a member, director, employee and creditor of the company at the same time.
- A company has the rights and duties of its own.
- A company is not an agent of members or directors.

Various other section of companies Act 2013
Apart from section 339 there are various other sections under which  directors and promoters are personally liable for the offences committed by the company.
Arrears of tax (Sec. 179 of the Income Tax Act, 1961)
-    In case a private company
-    Is being wound up, but
-    any tax payable by the company cannot be recovered.
-    Then, every person who was a director at any time during the relevant previous year
-    shall be jointly and severally liable for the payment of tax.

Ultra Virus Acts
The directors of a company shall be personally liable for all the ultra vires acts done by them on behalf of the company Ultra virus Acts means those acts of the company which are beyond  the  powers of the company as stated in the memorandum of Association of the company.
(B) Lifting of corporate veil under judicial decisions
Protection of revenue
Re, sir Dinshaw Maneckjee Pettit
An assessee was receiving huge dividend and interest income on certain investments.

Determining the character of the company – whether an enemy company
A company can be regarded as having enemy character under certain circumstances.
Daimler Co. Ltd. v Continental Tyre & Rubber Co. Ltd.

IS COMPANY A CITIZEN?: Citizenship under the Citizenship Act is available only to an individual. Therefore, no company can be a citizen of India.

DIFFERENCE BETWEEN A COMPANY AND  A FORM


Mode of creation: A company comes into existence only when it is incorporated under the Companies Act, 1956. A partnership  is formed on the basis of an agreement.  A partnership may or may not be registered under the Indian Partnership Act ,1932.
Separate legal entity: A company has an identify of its own. Law does not consider partnership as a separate legal entitiy.
Perpetual succession: A company enjoys the benefit of perpetual succession. Death or insolvency of shareholder(s) does not affect the continuity of the company. A partnership  comes to an end on the death,  or insolvency of a partner.
Transfer of shares: A member of the company can transfer his shares. On such transfer, the transferee becomes a member of the company.
Management: A company is managed by the directors.
Mutual agency : There is no mutual agency between the members of a company. Thus, no member of the company is bound by the acts of any other member. Similarly, the company is not bound by the acts of a member.  Acts of the partner bind other partners.
Separate property: A company has separate property
Capacity to sue and to sued : A company can sue and be sued in its own name.  Law regards partner and   firm as one.
Liability : The liability of the members is generally limited. Liabilty of partners is unlimited except where a firm has been constituted under Limited liability partnership Act.
Minimum number of  persons: There must be at least 2 members in case of a private company, and 7 members in case of a public company. Minimum two partners are required to form a partnership firm.
Maximum number of persons: The maximum number of members in case of a private company is 50. There is no maximum limit in case of a public company. Maximum number of partners is 10 in case of banking business and 20 in case of any other business.
Audit :The audit of accounts is mandatory in case of all companies
Minimum :Every private must have a minimum paid up capital of Rs. 1 lakh. Every public must have a minimum paid up capital of Rs. 5 lakhs.
Non-profit activities : A company may be formed for carrying on a non-profit activity.
Limitation of action: No creditor of the company has a right to proceed against any member for recovery of any amount payable by the company. This will be so, even if a member holds partly paid shares.  A credit can proceed against the partner if the firm is unable to pay its debt.
Contracts with members : Since a company has a separate identity apart from its members, it can enter into a contract with any member.
Division of profits :The distribution of profits is optional since a company may or may not declare dividends even if it has earned huge profits. Thus, no member is entitled to a fixed share of profits earned every year.

Section 11 is replaced by section 464
Under section 464 of the companies Act, an association or partnership which has been formed for the purpose of carrying on any business that has for its object acquisition of gain should have more than 50 members. If the number of members exceed fifty it should be  registered under the companies act or should be formed under any other law for the time  being in force.

In order to prevent the mischief arising from large trading undertakings being carried on by large fluctuating bodies so that persons dealing with them did not know with whom they were contracting, the law has put a ceiling on the number of persons constituting an association or partnership. An unincorporated company, association or partnership consisting of large number of persons has been declared illegal. Rule 10 of Companies (Miscellaneous) Rules, 2014 prescribes 50 persons in this regard.


By virtue of section 464 of the Companies Act, 2013, no association or partnership consisting of more than such number of persons as may be prescribed shall be formed for the purpose of carrying on any business that has for its object the acquisition of gain by the association or partnership or by the individual members thereof, unless it is registered as a company under this Act or is formed under any other law for the time being in force. The number of persons which may be prescribed under this section shall not exceed 100. Section 464 of the Act does not apply to the case of a Hindu undivided family carrying on any business whatever may be the number of its members.


However, this section is also not applicable to an association or partnership, if it is formed by professionals who are governed by special Acts. Since, the law does not recognize it, an illegal association:

Under sub-section (3) of section 464, every member of an illegal association shall be punishable with fine which may extend to one lakh rupees and shall also be personally liable for all liabilities incurred in such business.


Applicability of Section 464 to LLPs This section will not be applicable to LLPs as they are incorporated as bodies corporate under LLP Act.


The Government considered the recommendations of Irani Committee and also had detailed discussions and liberations with various stakeholders viz Industry Chambers, Professional Institutes, Government Departments, Legal Experts and Professionals etc. Thereafter, the Companies Bill, 2009 was introduced in the Lok Sabha on 3rd August, 2009, The Bill laid greater emphasis on self regulation and minimization of regulatory approvals in managing the affairs of the company. The Bill promised greater shareholder democracy, vesting the shareholders with greater powers, containing stricter corporate governance norms and requiring greater disclosures.

The objectives of the Bill were:

READ ALSO OUR TOP RATED COMPANIES ACT ARTICLES
Balance Sheet, Profit And Loss Account under Companies Act 2013
Assessment of Companies
Related Party Transaction (Applicable to both Private as well as Public Companies)
Checklist for Incorporation of Company
Posted by Accounting & Taxation at 1:25 AM