In line with the objectives to facilitate trade and improve ease of doing business, the following measures have been taken by CBEC during last one year: 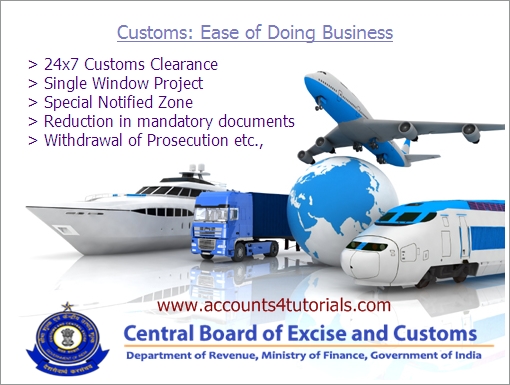 Single Window Project -Online message exchange: Single Window provides a common platform to EXIM trade to meet requirements of all regulatory agencies (such as Animal Quarantine, Plant Quarantine, Drug Controller, Textile Committee etc) through message exchange. It is basically a network of cooperating facilities bound by trust and set of agreed interface specifications in which trade has seamless access to regulatory services delivered through electronic means. Benefits of Single Window Scheme include ease of doing business, reduced costs, enhanced transparency, reduced duplicity and cost of compliance and optimal utilisation of resources. In this direction, with effect from 01.04.2015 an electronic online message exchange facility has been established between Customs and the Food Safety and Standards Authority of India (FSSAI) and the Department of Plant Protection, Quarantine and Storage (PQIS) at JNPT (Nhava Sheva), ICD, Tughlakabad and ICD, Patparganj, providing for real time seamless online exchange of information, including no objections, with/from these agencies [Circular No.9/2015-Customs, dated 31.03.2015 refers]. Other regulatory agencies such as the Animal Quarantine, the Textile Committee, the Drug controller of India and the Wild life authorities are also being brought within the ambit of Single Window Customs Clearance.

Special Notified Zone for trading of rough diamonds: Consequent to Hon'ble Prime Minister's announcement to make India into a hub for trading of rough diamonds, a 'Special Notified Zone' has been operationalised at Bharat Diamond Bourse at Mumbai. The procedure envisages major diamond mining companies bringing in rough diamonds for display and/or auctions to be conducted within the customs area and re-exporting the unsold consignments. [Circular No.17/2015-Customs, dated 26.05.2015 refers].

Adoption of Digital Signature: To dispense with requirement of physical submission of documents and encourage paper less working, with effect from 01.04.2015 on an optional basis the facility of 'Digital Signature' has been introduced for importers, exporters, airlines, shipping lines etc. However, for importers registered under the 'Accredited Client Programme' (ACP), digital signatures are mandatory with effect from 01.05.2015. Introduction of digital signature will maintain data integrity and reduce cost of compliance. [Circular No.10/2015-Customs, dated 31.03.2015 refers].

Reduction in mandatory documents for imports and exports: To facilitate trade and to simplify procedures, number of mandatory documents and prescribed only three mandatory export and import documents have been reduced. However, for import and export of special nature under preferential agreements etc., the requisite documents will be required to be submitted [Circular No.1/2015-Customs, dated 12.01.2015 refers].

Setting Up of Customs Clearance Facilitation Committee (CCFC): To ensure expeditious clearance of EXIM goods a high level administrative Committee i.e. 'Customs Clearance Facilitation Committee' (CCFC) has been put in place at every major Customs seaport and airport under the chairmanship of Chief Commissioner of Customs/Commissioner of Customs. This Committee would include the senior-most functionary of the other government departments/agencies, such as the Food Safety Standards Authority of India/the Port Health Officer (PHO); the Plant Quarantine, Animal Quarantine Authorities; the Drug Controller of India (CDSO); the Textile Committee; the Port Trust / the Airport Authority of India / Custodians; the Wild Life Authorities; the Railways/CONCOR; the Pollution Control Board. Members from trade can be co-opted to this Committee on need basis. The CCFC is mandated to focus primarily on ensuring and monitoring expeditious clearance of EXIM goods in accordance with the timeline specified by the parent ministry/Department concerned; identifying and resolving bottlenecks, if any, in the clearance procedure of imported and export goods; and resolving grievances of members of the trade and industry in regard to clearance process of imported and export goods. Similarly, at Central level, a 'Central Customs Clearance Facilitation Committee' has also been set up under the chairmanship of Revenue Secretary to address the issue relating to customs clearance and infrastructure impacting clearance of goods [Circular No.13/2015-Customs, dated 13.04.2015 refers].

Rationalisation of penal provision: Penalty provisions in Customs have been rationalised to encourage compliance and early dispute resolution. [Sections 82, 83, 84 of the Finance Act, 2015 refer].

Withdrawal of Prosecution in certain circumstances: Instructions have been issued providing for withdrawal of prosecution where a noticee has been exonerated in the quasi-judicial proceedings and such order has attained finality. [Circular No.998/05/2015-CX dated 28.02.2015 refers].

Life saving drugs and medicines imported by an individual for personal use are fully exempt from basic customs duty additional duty of customs subject to the condition that the importer produces a certificate, in each individual case, that the goods are life saving drugs or medicines issued, by the specified Authority. The prescribed Form for such certification has been amended to provide that such certificate can be issued for a period of one year in case of patients who have to import such drugs and medicines on a regular basis. [Condition No.10 of notification No.12/2012-Customs, dated 17.03.2012 as amended by notification No.10/2015-Customs, dated 01.03.2015 refers].

Scientific and technical instruments, apparatus, etc. imported by public funded and other research institutions registered with DSIR are eligible for concessional customs duties. When a new research institution was set up, initially the DSIR registration was not available leading to non-eligibility to aforesaid exemption. For such cases, a provision has been made for refund of customs duties paid at the time of import on submission of such certificate from the Department of Scientific & Industrial Research (DSIR). [Notification No.51/96-Customs, dated 23rd July, 1996 as amended vide notification No.24/2014-Customs, dated 11.07.2014 refers].

Specified road construction machinery imported for the construction of roads are fully exempt from duties of customs, subject to the condition that the importer shall not sell or otherwise dispose of the said goods for a period of five years from the date of importation. Clarification has been issued that road construction machinery imported duty free can be sold within 5 years of importation subject to payment of customs duty on depreciated value. It has also been clarified that individual constituents of the consortium, whose names appear in the contract, can also import goods under the said notification. [J.S. (TRU-I) letter D.O.F.No.334/15/2014-TRU dated 10.07.2014 refers].

Goods imported for setting up specified Mega Power Projects are fully exempt from duties of customs subject to the condition that in case of imports for a project for which the certificate regarding Mega Power Project status is provisional, the importer furnishes a bank guarantee or fixed deposit receipt for a term of 36 months or more. In such cases, some customs formations seeking bank guarantee with auto renewal clauses. This condition was amended to prescribe furnishing of bank guarantee or fixed deposit receipt for a period of 66 months. [Condition No.93 of notification No.12/2012-Customs, dated 17.03.2012, as amended by notification No.10/2015-Customs, dated 01.03.2015 refers].

The requirement of registration with Directorate General of Shipping for availing the customs duty exemption by ship repair units has been done away with. [Notification No.12/2012-Customs, dated 17.03.2012, as amended by notification No.43/2015-Customs, dated 04.08.2015 refers].