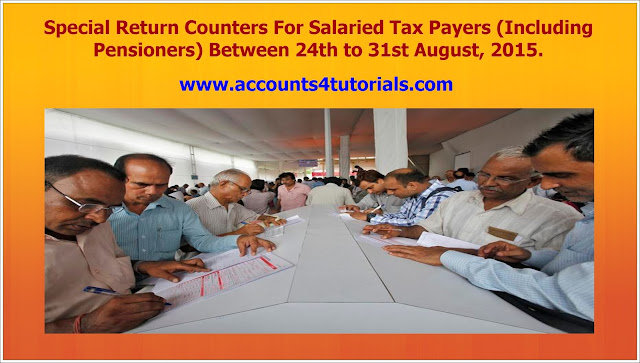 The Pr. Chief Commissioners of Income Tax, New Delhi will be organizing special return counters for salaried tax payers (including pensioners) between 24 to 31 August, 2015 at Pratyaksha Kar Bhawan, Civic Centre, Minto Road, New Delhi. The camp will be inaugurated by Chairperson of the Central Board of Direct Taxes, Smt. Anita Kapur on 24 August 2015 at 10.00 am.

The special counters are being organized to facilitate smaller tax payers having salary/pension income, to file paper returns. Taxpayers may note that for the assessment year 2015-16, corresponding to the financial year 2014-15, e-filing of return of income is mandatory for persons whose total income exceeds Rs. 5 lakhs or if the return contains a claim for refund. Paper Returns in such cases will not be accepted.

However, the income limit of Rs. 5 lakhs and claim of refund will not apply to taxpayer over the age of 80 years deriving salary/pension income. In such cases paper returns will be accepted.

The special counters would be set up jurisdiction wise as follows:
There will be special facilitation counters for senior citizens and differently abled persons.

Similar facilitation counters are being set up in other metropolitan cities based on the local requirement.