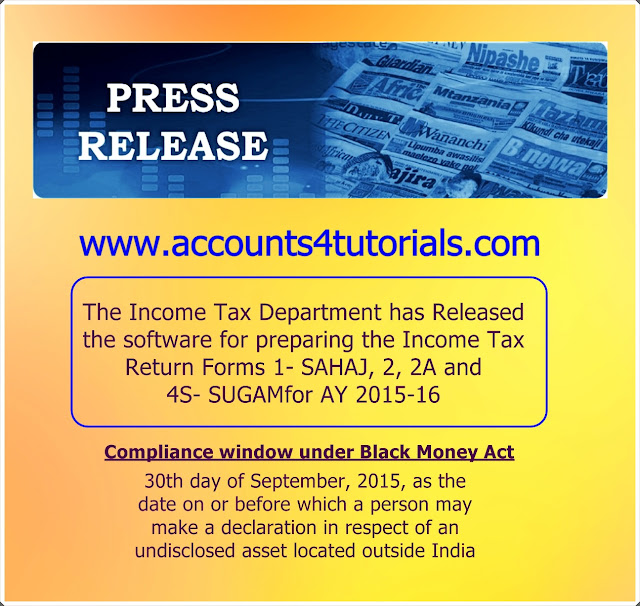 Commencement of Electronic Filing of Income Tax Returns
For the A.Y 2015-16


The Income Tax Department has released the software for preparing the Income Tax Return forms 1- SAHAJ, 2, 2A and 4S- SUGAMfor AY 2015-16. The e-filing of these return forms has been enabled on the e-filing website-https://incometaxindiaefiling.gov.in

The facility for pre-filling of information for these return forms is available in the software for preparing the return forms. When the taxpayer exercises this option and just fills in his PAN,then personal information and information on taxes paid and TDS will be auto-filled in the form. Taxpayers are requested to use the return preparation software available free of cost under the ‘Downloads’ section on the home page of the Income Tax Department’s e-filing website https://incometaxindiaefiling.gov.in The use of Departmental software will ensure preparation of error-free returns thereby avoiding any need for future rectification due to data validation mistakes


Notification of dates for compliance window under
Black Money Act


The Finance Minister, in the budget speech this year, had announced that a comprehensive new law to deal with black money stashed away abroad would be enacted. The Bill to enact the proposed new law was passed by the Parliament in its Budget Session. The Bill received Presidential assent and became law on 26th May,2015. The Act provides for separate taxation of undisclosed foreign income and assets.Stringent penalties and prosecution, including rigorous imprisonment upto ten years and penalty equal to three times of the tax have been prescribed for violation. The Act also provides a compliance window for a limited period to persons who have undisclosed foreign assets which they have not disclosed for the purposes of Income-tax so far.

The Central Government has notified the 30th day of September, 2015, as the date on or before which a person may make a declaration in respect of an undisclosed asset located outside India under the compliance provisions of the Black Money (Undisclosed Foreign Income and Assets) and Imposition of Tax Act, 2015 (‘Black Money Act’).

The last date by which a person must pay the tax and penalty in respect of the undisclosed foreign assets so declared shall be the 31st day of December, 2015.

Detailed features of the compliance window are notified separately.
Posted by Accounting & Taxation at 6:55 PM