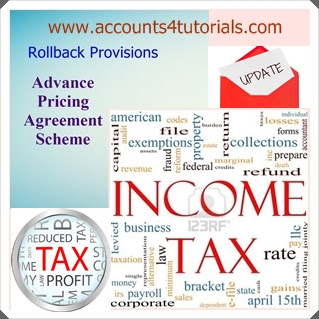 Rollback provisions in the APA Scheme were introduced through sub-section (9A) inserted in section 92CC by the Finance (No. 2) Act, 2014 and the relevant rules, namely, Rules 10MA and 10RA, have been notified recently vide S.O. 758(E) dated 14th March, 2015 and S.O. 915(E) dated 1st April, 2015. Subsequent to the notification of the rules, requests for clarification regarding certain issues have been received in the Central Board of Direct Taxes. In order to clarify such issues, the Board has decided to adopt a Question and Answer format and the clarifications are hereby provided as below:

Q.1 Under rule 10 MA(2)(ii) there is a condition that the return of income for the relevant roll back year has been or is furnished by the applicant before the due date specified in Explanation 2 to sub-section (1) of section 139 of the Income-tax Act (hereinafter referred to as the ‘Act’). It is not clear as to whether applicants who have filed returns under section 139(4) or 139(5) of the Act would be eligible for roll back.

However, rollback provisions will not be available in case of a return of income filed under section 139(4) because it is a return which is not filed before the due date.

Q.2 Rule 10MA (2)(i) mandates that the rollback provision shall apply in respect of an international transaction that is same as the international transaction to which the agreement (other than the rollback provision) applies. It is not clear what is the meaning of the word “same”. Further, it is not clear whether this restriction also applies to the Functions, Assets, Risks (FAR) analysis.

The word “materially” is generally being defined in the Advance Pricing Agreements being entered into by CBDT. According to this definition, the word “materially” will be interpreted consistently with its ordinary definition and in a manner that a material change of facts and circumstances would be understood as a change which could reasonably have resulted in an agreement with significantly different terms and conditions.

Q.4 Rule 10 MA(3) states that the rollback provision shall not be provided in respect of an international transaction for a rollback year if the determination of arm’s length price of the said international transaction for the said year has been the subject matter of an appeal before the Appellate Tribunal and the Appellate Tribunal has passed an order disposing of such appeal at any time before signing of the agreement. Further, Rule 10 RA(4) provides that if any appeal filed by the applicant is pending before the Commissioner (Appeals), Appellate Tribunal or the High Court for a rollback year, on the issue which is subject matter of the rollback provision for that year, the said appeal to the extent of the subject covered under the agreement shall be withdrawn by the applicant.

There is a need to clarify the phrase “Tribunal has passed an order disposing of such appeal” and on the mismatch, if any, between Rule 10MA(3) and Rule 10RA(4).

Answer:
The reason for not allowing rollback for the international transaction for which Appellate Tribunal has passed an order disposing of an appeal is that the ITAT is the final fact finding authority and hence, on factual issues, the matter has already reached finality in that year. However, if the ITAT has not decided the matter and has only set aside the order for fresh consideration of the matter by the lower authorities with full discretion at their disposal, the matter shall not be treated as one having reached finality and hence, benefit of rollback can still be given.

Answer:
It is clarified that in case the terms of rollback provisions contain specific agreement between the Board and the applicant that the agreed determination of ALP or the agreed manner of determination of ALP is subject to the condition that the ALP would get modified to the extent that it does not result in reducing the total income or increasing the total loss, as the case may be, of the applicant as declared in the return of income of the said year, the rollback provisions could be applied. For example, if the declared income is Rs. 100, the income as adjusted by the TPO is Rs. 120, and the application of the rollback provisions results in reducing the income to Rs. 90, then the rollback for that year would be determined in a manner that the declared income Rs. 100 would be treated as the final income for that year.

Q.6 Rule 10RA(7) states that in case effect cannot be given to the rollback provision of an agreement in accordance with this rule, for any rollback year to which it applies, on account of failure on the part of applicant, the agreement shall be cancelled. It is to be clarified as to whether the entire agreement is to be cancelled or only that year for which roll back fails.

Answer:
Yes, the ALP could be different for different years. However, the manner of determination of ALP (including choice of Method, comparability analysis and Tested Party) would be same.

Q.10 Whether applicant has an option to withdraw its rollback application? Can the applicant accept the rollback results without accepting the APA for the future years?

Q.11 For already concluded APAs, will new APAs be signed for rollback or earlier APAs could be revised?

Answer:
The second proviso to Rule 10MA(5) provides for revision of APAs already concluded to include rollback provisions.

Q.12 For already concluded APAs, where the modified return has already been filed for the first year of the APA term, how will the time-limit for filing modified return for rollback years be determined?

Answer:
The time to file modified return for rollback years will start from the date of signing the revised APA incorporating the rollback provisions.

Q.13 In case of merger of companies, where one or more of those companies are APA applicants, how would the rollback provisions be allowed and to which company or companies would it be allowed?

Q.14 In case of a demerger of an APA applicant or signatory into two or more companies (persons), who would be eligible for the rollback provisions?

Answer:
The same principle as mentioned in the previous answer, i.e., the person (company) who makes an APA application or enters into an APA would only be entitled for the rollback provisions, would continue to apply. To illustrate, if A has applied for or entered into an APA and, subsequently, demerges into A and B, then only A will be eligible for rollback for international transactions covered under the APA. As B was not in existence in rollback years, availing or grant of rollback to B does not arise.

Posted by Accounting & Taxation at 7:39 PM