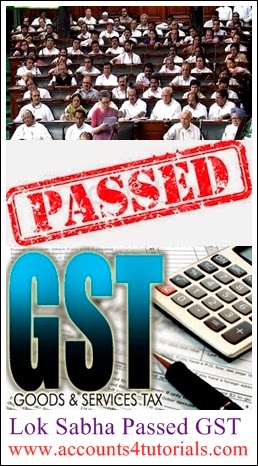 The Lok Sabha passed the much-delayed Constitution Amendment Bill to Goods and Service Tax (GST) on Wednesday, paving the way for a new bill on the uniform tax regime, even as the Congress Party staged a walkout in protest.

The Constitution Amendment Bill to implement GST, originally mooted by the UPA, was passed by 352 votes against 37 after the government rejected the opposition demand of referring it to a standing committee.

The bill was passed after division, with 352 members voting in favour of the bill and 37 against.

1. The basic principal governing behind GST is to have single Taxation System for Goods and Services
across the country. Currently Indian economy has various taxes on Goods and services such as VAT,
Service Tax, Excise, Entertainment Tax, Luxury Tax Etc. now in the new Proposal of GST; we will be
having only two taxes on all goods and Services as follows:
2. In case of Central GST, following Taxes will be subsumed with CGST which are at presently levied
separately on goods and services by Central government:
3. In case of State GST, following taxes will be subsumed with SGST; which are priestly levied on goods
and services by State Governments :
4. The basic principal for subsuming of taxes in GST is provided as follows:
5. Taxes on items containing alcohol and petroleum product are kept out of GST. They will continue to be taxed as per existing practices.

6. Tax on Tobacco products will be subject to GST. But government can levy the extra Excise duty over
and above GST.

7. The Small Taxpayer: The small taxpayers whose gross annual turnover is less than 1.5 Crore are
exempted from CGST and SGST.

9. Cross utilization of ITC between the Central GST and State GST would not be allowed. Exception: Inter State Supply of goods and services.

10. PAN based identification number will be allowed to each taxpayer to have integration of GST with Direct Tax.