FINANCE UPDATES FOR THE MONTH OF MARCH-2015

Small Companies:
Private limited companies with a paid-up share capital not exceeding Rs. 50 lakhs or turnover not exceeding Rs. 2 crore are defined as “Small Companies” under Section 2(85) of the Companies Act, 2013. A small company is provided certain relief/exemptions similar to those provided to ‘One Person Company’. The Government vide the  Companies  (Removal  of  Difficulties)  Order, 2015 [see S.O. 504(E) dated 13.02.2015] has clarified  that  a  small  companymust  conform  to both the ceilings

Acquisition  of  Securities  by  Finance  Sector Companies :
Acquisition  of  securities  of  any other   body   corporate,   directly   or   indirectly, beyond  certain limits  linked  to  paid-up  share capital,  free  reserves  and  securities  premium account,  are prohibited  under  Section  186(2)(c) of  the  Companies  Act,  2013.  Exemptions  have been granted in favour of NBFCs and companies whose  principal  business  is  the  acquisition  of securities  from  operation  of  this  restriction,  as per  Section  186(11)(b).  The  Government  has also  exempted  banking,  insurance  and  housing finance companies, from this restriction, enabling them to acquire securities in their ordinary course of business [see S.O. 504(E) dated  13.02.2015]

Amendment of Companies Act, 2013:
In response to certain issues raised by stakeholders, the Ministry had moved the Companies Amendment) Bill, 2014 containing amendments to 21 such provisions. After its passage in the Lok Sabha on 17.12.2014, it was introduced in the Rajya Sabha on 23.12.2014.

ICSI Capacity Building Programs on Secretarial Audit:
Listed companies and public limited companies with a paid-up share capital of Rs. 50 crore or more or turnover of Rs. 250 crore or more, are required to annex a Secretarial Audit report along with their Board’s Report. The Secretary’s Audit report is to be given by a company secretary, in e-Form MR-3, with effect from financial year 2014-15. The Institute of Company Secretaries of India (ICSI) holds Conferences on Secretariat  Audit to educate its members about the concept, its need and scope and to build their capacity with a practical approach. For FAQs on Secretarial Audit, the reader may visitits website (www.icsi.edu)

Investor Protection and Awareness:
A. In collaboration with the three Professional Institutes (i.e., Institute of Chartered Accountants of India, Institute of Company Secretaries of India, and Institute of Cost Accountants of India), 39Investor Awareness Programmes were conducted in different towns/cities of the country during February, 2015.
B. Till the end of February, 2015, 3468companies uploaded information about unpaid and unclaimed amounts of investors on the website iepf.gov.in. A reported sum of Rs. 4305.39 crore was lying unclaimed with these companies. This website has been set up by the Ministry for companies to file details of unpaid and unclaimed amounts of investors during the past seven years, which are yet to be transferred to the Investor Education and Protection Fund, so as to enable the investor to claim the said money from the company

Review of Corporate Sector:
A. As on 28.02.2015, the number of companies registered under the Companies Act was 14,52,243. Of these, 2,66,401 companies were closed, 5,276 companies are under liquidation and 23,148 companies are in the process of being struck-off from the register. 151 companies have so far obtained the “dormant” status according to Section 455 of the Companies Act, 2013. Further, a total
number of 1,39,507 companies have not filed their Annual Returns/ Balance Sheets for the past three consecutive years or more, and therefore not counted as active. There are 10,17,576 active companies, including 1,13,269 companies which were incorporated within the preceding eighteen months (not due for Annual Statutory Filings). 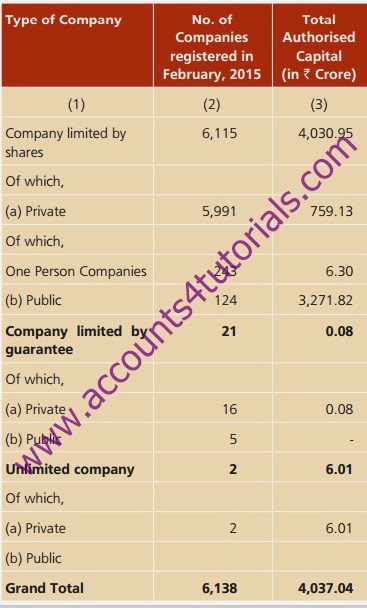 C. Under the category of companies registered as limited by shares during the Month of February, 2015, Delhi had maximum number of  registrations (1,169) followed by Maharashtra (991) and Uttar Pradesh (640). “Business Services” topped the economic activity-wise classification (2767) of newly registered companies.

D. During February, 2015, two Central Public Sector Undertakings (CPSUs) and three State Level Public Enterprises (SLPEs) were registered. The aggregate authorized capital of these companies was Rs. 3016.55 crore. For more statistical details about the growth of the corporate sector, the reader is invited to the ‘Monthly Information Bulletin on Corporate Sector’, at URL: mca.gov.in/ MinistryV2/
InformationBulletin.html.

In a measure to encourage the Indian corporates and make them more competitive, the rate of corporate tax is to be reduced from the present level of 30% to 25% over the next four years