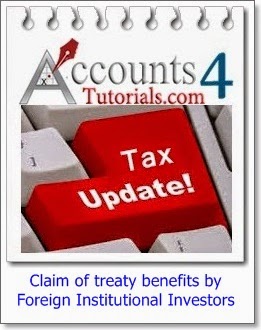 It has come to the notice of the Board that several Foreign Institutional Investors receiving  income  from  transactions  in  securities  claim  such  income  as  exempt  from  tax under the Income Tax Act, 1961(‘the Act’) by availing benefit provided in the Double Taxation Avoidance Agreements(‘DTAAs’) signed between India and  their  respective countries of residence.

Since  the  issue  involved  in  such  cases  is  limited,  such  claims  should  be  decided expeditiously.  It  has  therefore  been  decided  that  in  all  cases  of  Foreign  Institutional Investors seeking treaty benefits under the provisions of respective DTAAs, decision may be taken on such claims within one month from the date such claim is filed.

The officers concerned have been directed accordingly.