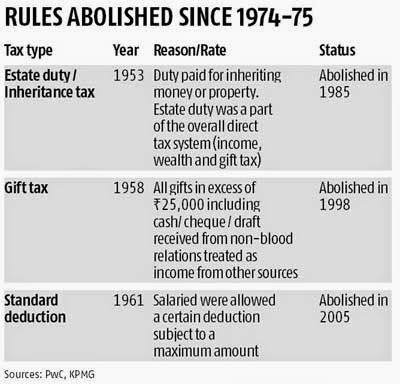 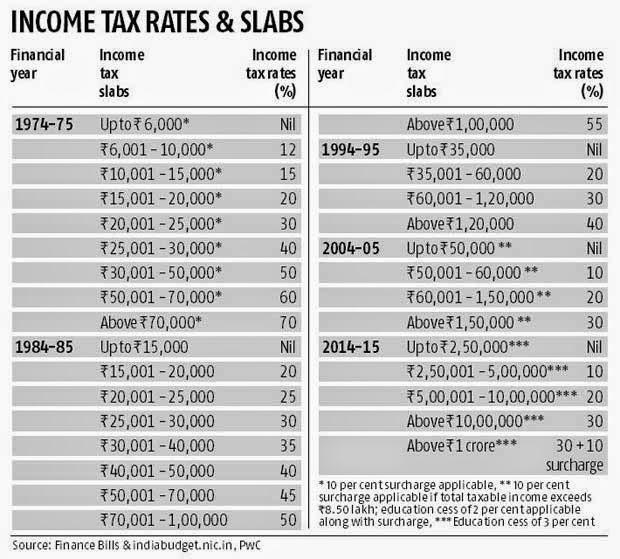 For those of you who think the 30 per cent peak income tax rate along with an education cess of three per cent is way too high, here's something that could make you feel better. Forty years ago, an individual in the highest tax bracket (above Rs 70,000 per annum) had to pay 70 per cent income tax. And, the basic exemption limit was only Rs 6,000. In 1974-75, there were eight tax brackets.

In the '80s, things improved as the basic exemption limit was increased to Rs 15,000 and the highest rate (applicable for income above Rs 1 lakh a year) was reduced to 55 per cent.

Real reforms, both in terms of tax rates and tax brackets came in the 1990s. The number of tax brackets was slashed to four and the tax rate was brought down to 40 per cent. The tax rates now stand at 10, 20 and 30 per cent, with an educational cess of three per cent. There is an additional 10 per cent surcharge on incomes of more than Rs 1 crore. In total, those in the top income tax bracket pay tax at the rate of 36.3 per cent.

Over the years, finance ministers have also got rid of the distinction between slabs for men and women and introduced a special category for very senior citizens, for those above the age of 80 years. The latter is an important move, as India does not have any social security system. In the recent Budget, Finance Minister Arun Jaitley increased the basic exemption limit for those above 60 years to Rs 3 lakh from Rs 2.50 lakh for the past two years.

has been in the area of tax returns. In 1974-75, filing returns used to be one of the most tedious exercises. Apart from long queues, one had to fill the returns form giving annual income details. Form 16 (obtained from employer) had to be attached to the Tax Returns Form. If one had any other form of income (say, interest income), not reported earlier in the year, then he had to attach proof. This had to be submitted in the local income tax office assigned to the assessee on the ward number. The tax office would, in turn, hand over the acknowledgement slip.

Given the manual system of processing returns, there was a considerable delay in processing refund claims and the response of the tax administration to taxpayers' grievances was substandard.

All that is distant memory. The government has introduced simplified tax return forms, electronic filing of tax returns, e-payment of taxes, computerised processing of returns and refunds. The e-filing facility was introduced by the department in the financial year 2005-06. At present, anybody earning a yearly taxable salary of Rs 5 lakh or more has to file returns online.

In January of 2007, the Refund Banker Scheme was launched. Now, the data of refunds determined by the assessing officer gets transferred to the refund banker (State Bank of India) which issues a refund through an Electronic Clearing System (ECS). This made obtaining refund hassle-free and quicker. Refunds are now credited directly to the individual taxpayer's bank account, as mentioned by them in their tax returns.
Posted by Accounting & Taxation at 12:01 AM