1. Deduction at lower or nil rate requires certificate u/s.197, which will take effect from the day it is issued. It cannot be used retrospectively.

2. If TDS/TCS certificate is lost, duplicate may be issued on a plain paper giving necessary details marking it as duplicate.

3. Refund can be claimed by the deductee on filing of return of income.

4. Even if the recipient of payment has shown it in his income-tax return and paid the taxes thereon, the deductor/collector who has failed to deduct/collect tax will be liable to pay interest and penalty

Issuance Of TDS certificate Form 16 and Form 16A

Tax deducted on or after 01.04.2012, it is mandatory for all type of deductors to issue quarterly form 16A (non salary tds certificate) only after downloaded the same from the TDSCPC website. Earlier this was mandatory for only companies ,Banks and co-operative societies engaged   in Banking services with effect from 01.04.2011 through circular number 3/2011.

Form 16A downloaded from TDSCPC can be signed manually or can be authenticated through digital signature only.

Though this will be an increase in work load on small traders also but it is welcome step as it will reduce arbitrary demands by department due to mismatching of TDS claimed and TDS shown on form 26AS. Moreover small traders are also not small now .TDS is to be deducted by HUF and Individual only if their turnover/Receipt is during the immediately preceding year more than limit prescribed under section 44AB .Present limit for FY 2012-13 is proposed to be increased to 1 crore for business and 25 lakh for Professionals. 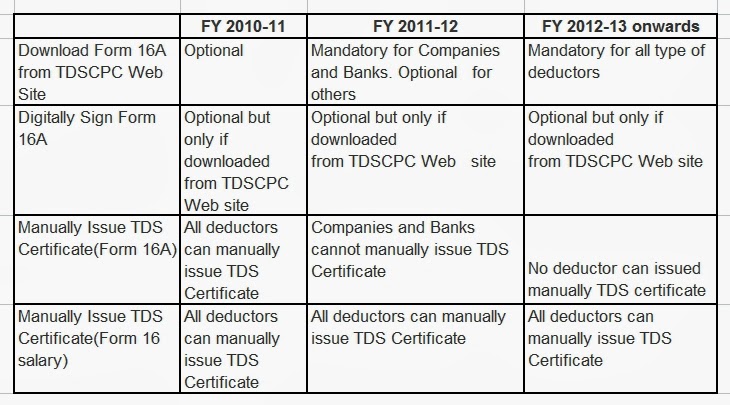 So manually field form 16A cannot be issued for tax deducted on or after 01.04.2012. However form 16 salary can be issued without downloading from the TRACES site.

1. To apply for Tax Deduction Account Number (TAN) in form 49B, in duplicate at the designated TIN facilitation centers of NSDL(please see www.incometaxindia.gov.in), within one month from the end of the month in which tax was deducted.

2. To quote TAN (10 digit reformatted TAN) in all TDS/TCS challans, certificates, statements and other correspondence.

3. To deduct/collect tax at the prescribed rates at the time of every credit or payment, whichever is earlier, in respect of all liable transactions.

4. To remit the tax deducted/collected within the prescribed due dates by using challan no. ITNS 281 by quoting the TAN and relevant section of the Income-tax Act.

5. To issue TDS/TCS certificate, complete in all respects, within the prescribed time in Form No.16(TDS on salaries), 16A(other TDS) 27D( TCS).

6. To file TDS/TCS quarterly statements within the due date.

7. To mention PAN of all deductees in the TDS/TCS quarterly statements. 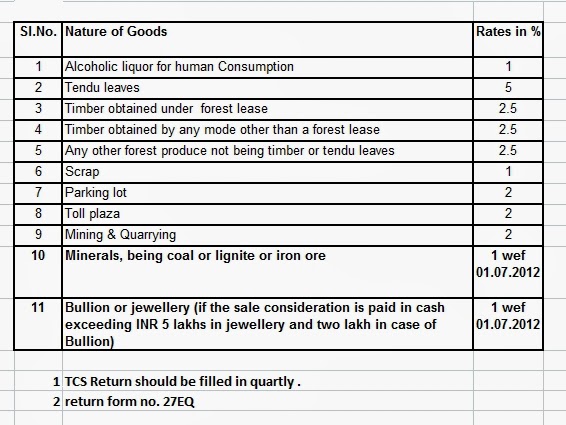 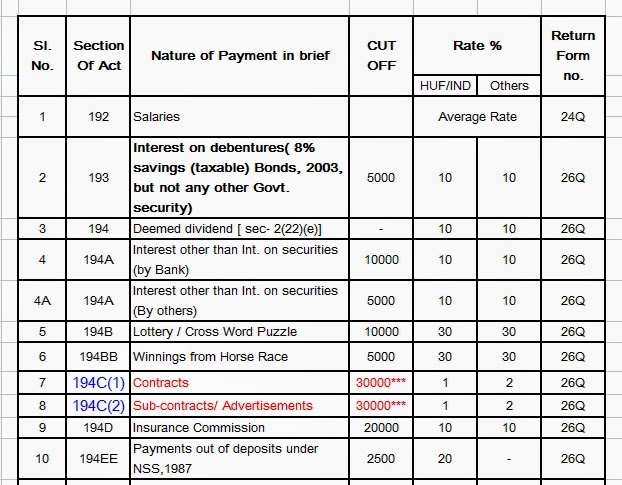 TDS not deductiable:-TDS by Individual and HUF (Non Audit) case not deductible

1. An Individual or a Hindu Undivided Family whose total sales, gross receipts or turnover from business or profession carried on by him does not exceeds the monetary limits(Rs.100,00,000 in case of business & Rs.25,00,000 in case of profession) under Clause (a) or (b) of Sec.44AB during the immediately preceding financial year shall not be liable to deduct tax u/s.194A,194C, 194H, 194I & 194J.

2. So no tax is deductible by HUF/Individual in first year of operations of business even sales/Fees is more than 100/25 Lakh.

Note:
1. Yearly Limit u/s 194C: Where the aggregate of the amounts paid/credited or likely to be paid/credited to Contractor or Sub-contractor exceeds Rs.75,000 during the financial year, TDS has to be deducted u/s 194C.

2.TDS at higher rate ie., 20% has to be deducted if the deductee does not provide PAN to the deductor.(read detail u/s 206AA)

3. No TDS on Goods Transport  :No deduction shall be made from any sum credited or paid or likely to be credited or paid during the previous year to the account of a contractor during the course ofbusiness of plying, hiring or leasing goods carriages on furnishing of his Permanent Account Number, to the person paying or crediting such sum.(read details here No TDS on Goods Transport )

4. Surcharge on tax is not deductible/collectible at source in case of  resident individual/ HUF /Firm/ AOP / BOI/Domestic Company in respect of payment of income other than salary.

5. Surcharge on TDS is applicable on payment made to non resident other than company ,if payment is in excess of one crore.(10 %)

6. Surcharge on TDS on salary is applicable if taxable salary is more than one crore @ 10 %

7. In the case of Company other than Domestic Company.
(i) at the rate of two per cent. of such tax, where the amount or the aggregate of such amounts collected and subject to the collection exceeds one crore rupees but does not exceed ten crore rupees;

(ii) at the rate of five per cent. of such tax, where the amount or the aggregate of such amounts collected and subject to the collection exceeds ten crore rupees. 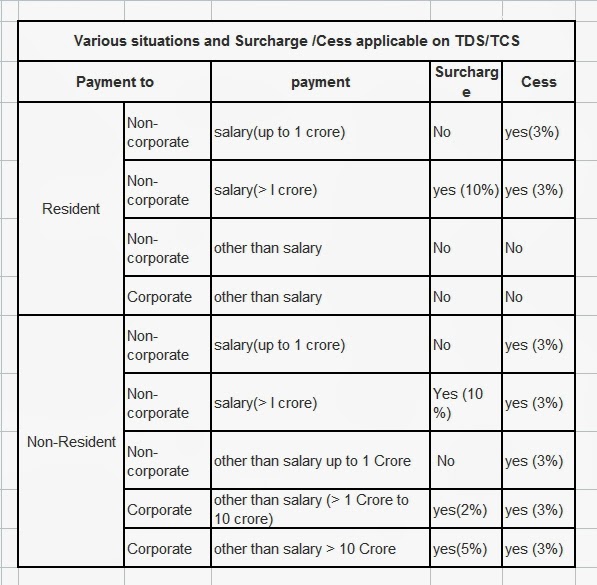 Due date to Deposit TDS and TCS

1.“Time and mode of payment to Government account of tax deducted at source or tax paid under sub­ section (1A) of section 192.

2. Rule :30.
(1) All sums deducted in accordance with the provisions of Chapter XVII‐B by an office of the Government shall be paid to the credit of the Central Government ‐

(a) on or before 30th day of April where the income or amount is credited or paid in the month of March; and
(b) in any other case, on or before seven days from the end of the month in which‐

(3) Notwithstanding anything contained in sub‐rule (2), in special cases, the Assessing Officer may, with the prior approval of the Joint Commissioner, permit quarterly payment of the tax deducted under section 192 or section 194A or section 194D or section 194H for the quarters of the financial year specified to in column (2) of the Table below by the date referred to in column (3) of the said Table:‐

NOTIFICATION No. 238/2007, dated 30-8-2007.Now following person are liable to file etds/etcs return.
1. All Government department/office or
2. All companies.or
3. All person required to get his accounts audited under section 44AB in the immediately preceding financial year; or
4 The number of deductees’ records in a quarterly statement for any quarter of the immediately preceding financial year is equal to or more than fifty,

Summary:-
I. Deposit TDS:-
1.All sums deducted in accordance with the provisions of Chapter XVII‐B  deposit on the same day where the tax is paid without production of an income‐tax challan

II.ETDS Return Filling Due Dates(TDS)
Due Dates For ETDS returns (Form 24Q for salary and 26Q for contractors others ,27Q for Non-resident)

IV.OBTAINED REFUND:- a claim of refund for TDS paid to the credit of the CG under chapter XVII-B , shall furnished by the deductor in form no. 26B electronically under digital signature.

Failure to deduct or remit TDS /TCS(full or part)

1. Interest:Interest at the rates in force (12% p.a.) from the date on which tax was deductible /collectible to the date of payment to Government Account is chargeable. The Finance Act 2010 amended interest rate wef 01.07.2010 and created a separate class of default in respect of tax deducted but not paid to levy interest at a higher rate of 1.5 per cent per month, i.e. 18 per cent p.a. as against 1 per cent p.m., i.e. 12 per cent p.a., applicable in case the tax is deducted late after the due date. The rationale behind this amendment is that the tax once deducted belongs to the government and the person withholding the same needs to be penalized by charging higher rate of interest Penalty equal to the tax that was failed to be deducted/collected or remitted is leviable.

2. In case of failure to remit the tax deducted/collected, rigorous imprisonment ranging from 3 months to 7 years and fine can be levied.

3. Failure to apply for TAN in time or Failure to quote allotted TAN or Wrong quoting of TAN :Penalty of Rs.10,000 is leviable u/s.272BB(for each failure)

Failure to deliver statement within time prescribed u/s 200 (3) or to the proviso to sub-section (3) of section 206C may liable to penalty which shall not be less than Rs. 10,000/- but which may extend to Rs. 1,00,000/-. No penalty if payment of tax deducted or collected along with fee or interest and delivering the statement  aforesaid before the expiry of 1 year from the  time prescribed for delivering the such statement. However No penalty shall be imposed u/s 271H if the person proves that there was reasonable cause for the failure.(section 273B)

Assessee In default (amendment in section 201)

The Deductor will not to be treated as assessee in Default provided the resident payee has furnished his return u/s 139 and has taken into account such  amount for computing  income in such Return of Income and has paid the Tax Due on the income declared by him in such return of income and furnishes a certificate to this effect, duly certified by a CA, in the prescribed form. This form is yet to be notified.

However, the interest for not deducting tax would be  payable from the date on which such tax was collectible till the date of  furnishing of return of  income by the resident payee. 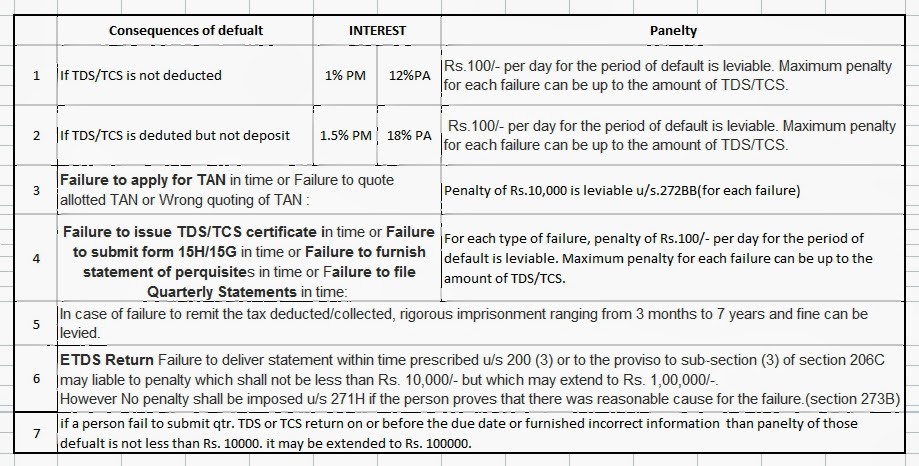 Posted by Accounting & Taxation at 9:55 PM