An Exclusive Compilation of all TDS related provisions. The chart is helpful for both  Professional & Academic Views & Requirements. 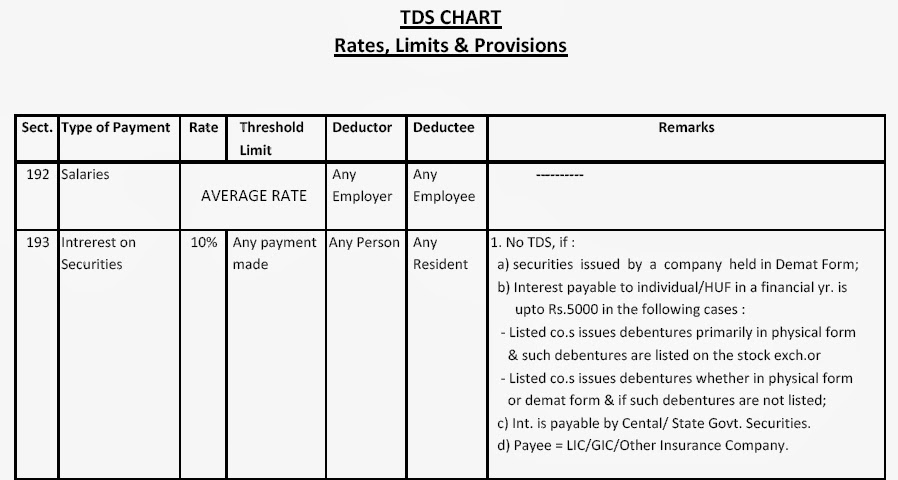 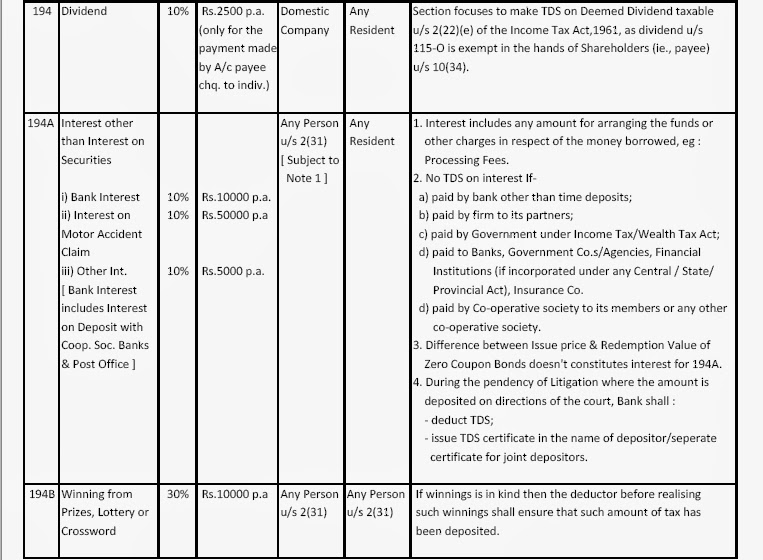 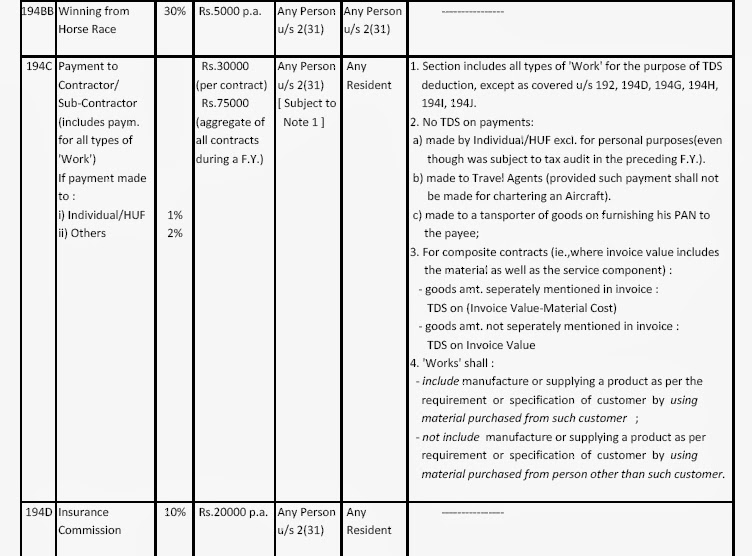 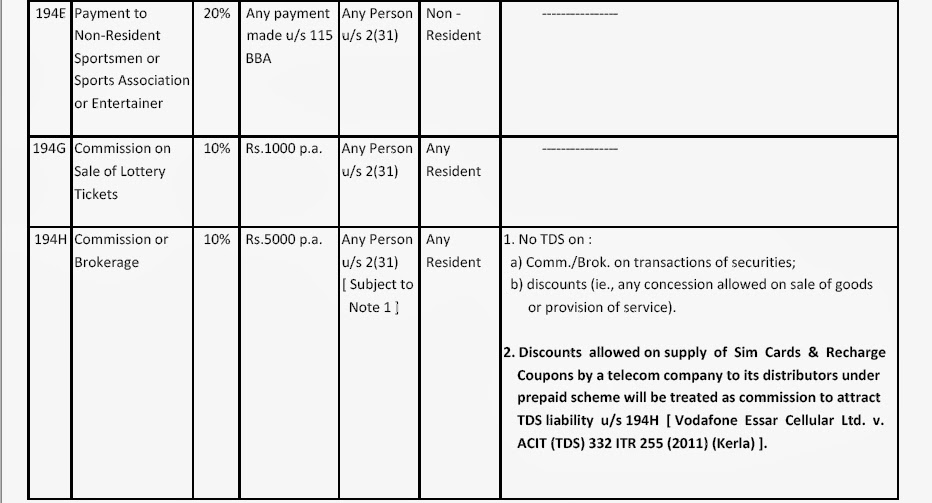 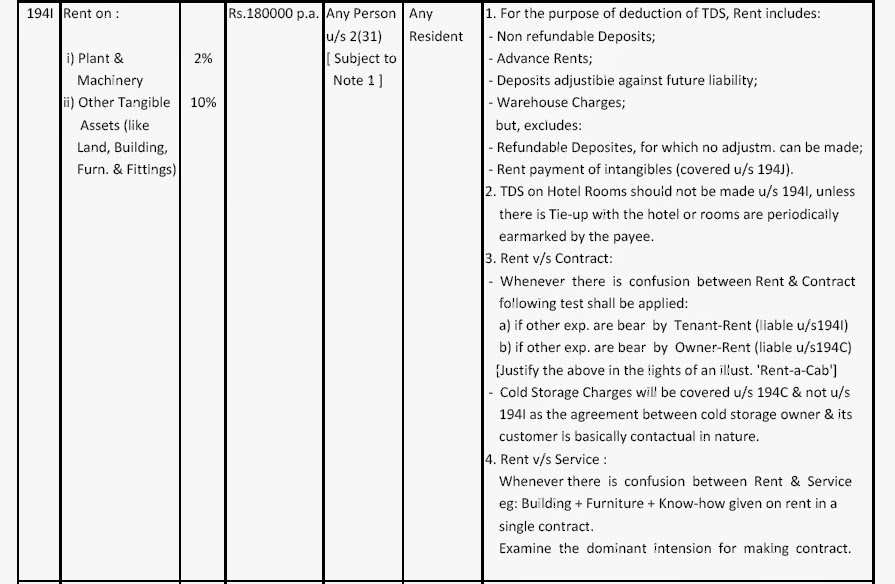 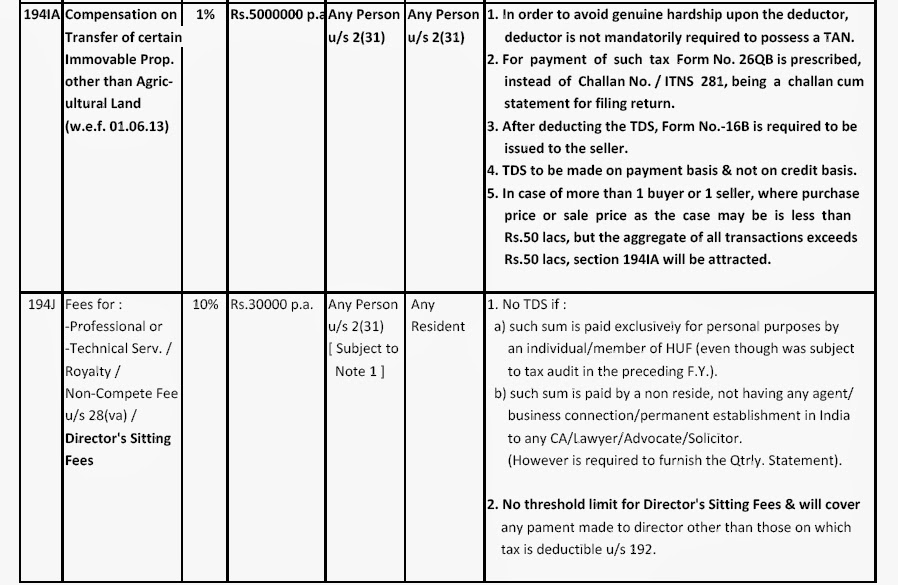 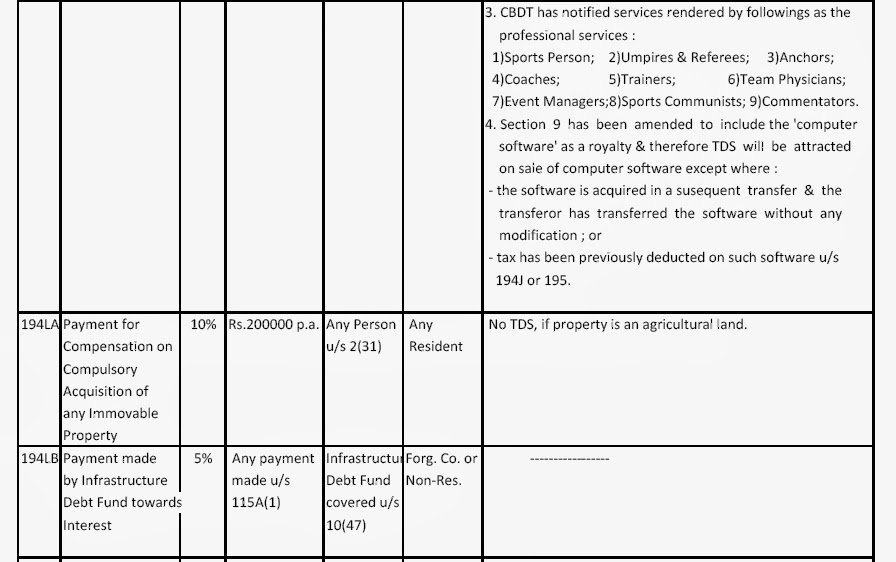 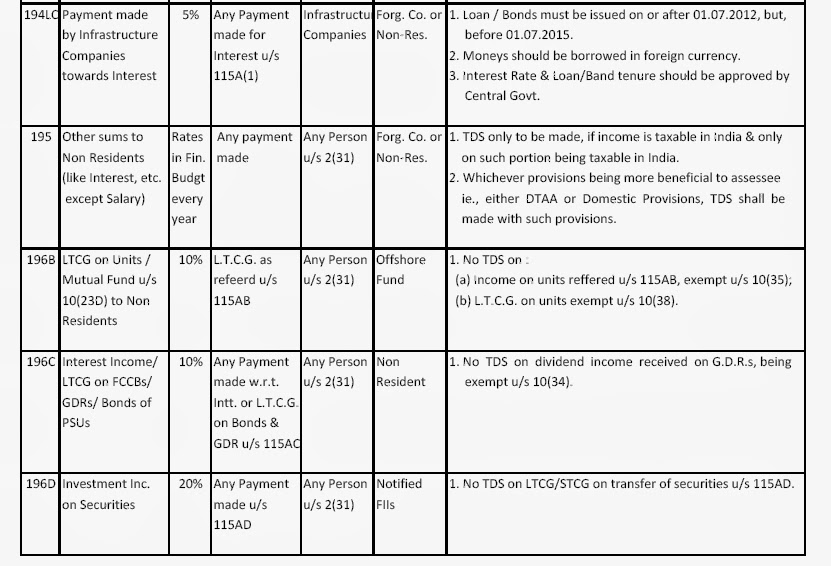 3. The amount which is subject to TDS liability, though being credited to any account, even under Suspense a/c willdeemed to be credited to the account of the payee.

6. No Surcharge & Cess will be levied, w.e.f. 01/04/2009. However, TDS made w.r.t. payments made to non-residentwill be liable for levy of Education Cess & Secondary & Higher Education Cess.

7. TDS will be deducted on amount inclusive of Service Tax, except in case of TDS on Rent.

10. Last Dates for :
a) Deposition of TDS without late interest :
- TDS made from April to February - 7th of following month in which TDS made ;
- TDS made in March - 30th of April .
b) Deposition of TDS for getting expenditure to be allowed in the same previous year :
- TDS made from April to February - 31st March (i.e., Balance Sheet Date) ;
- TDS made in March - 30th September (i.e., Last Date of Filing of Income Tax Return).
c) Deposition of Quartely TDS Returns (without Penalty) :
- For I, II & III Quarters - 15th of the following month from the end of Quarter
( However, the above relevant due dates for I,Ii & III Qtrs. for the govt. deductor is 31st instead of 15th) ;
- For IV Quarters - 15th of May.

11. TDS certificates to be issued mandatorily, w.e.f. 01st April, 2012 in Form 16A or 16B(for TDS u/s 194IA) generated& downloaded online through TIN Central System ( ie., from website 'www.tdscpc.gov.in' ) with a unique TDSCertificate No. (except Form 16), with the digital signatures & shall be issued quarterly within 15 days of fillingof quarterly statements u/s 203.
[However, in case of Salary, Certificate to be issued upto 31st May from the end of the relevant previous year].

12. TDS mandatorily required to be deposited electronically in the following cases : [Sect. 200]
a) Company;
b) Tax Audit Assessee

14. Deductor will be allowed to adjust excess TDS deposited in any quarter of a F.Y., within anyother quarter of thesame F.Y. However, if can't be adjusted during the same F.Y., payer shall be allowed refund for the same.
Provided :
- Credit of that excess amount has not been claimed by the deductee;
- Deductor has not allowed TDS certificate to the deductee for the excess amount;
- Deductee is a resident.
- Refund has claimed within 2 years(with the approval of Additional CIT(TDS)) from the end of the F.Y. in which
the TDS was deductible.
[ Excess TDS = TDS deposited - TDS deductible ]

15. No TDS on Interest or Dividends or Other sums payable to followings as specified u/s 196 :
1. Government ;
2. Reserve Bank of India ;
3. Mutual Funds ;
4. Corporation established under any Central act whose Income is exempt from Tax.