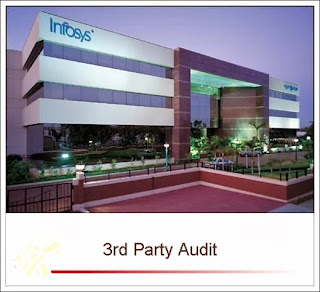 Infosys will need to hire an independent, third-party auditor to monitor and review its compliance with certain visa rules in the United States.

In a regulatory filing on the US Securities and Exchange Commission, the country's second-largest information technology exporter said that over the next two years, a third-party auditor will analyse a random sample of not less than 4% of its existing US workforce to determine if the I-9 forms have been completed and maintained in full compliance with the requirements.
The Banglaore-based, India's second-ranked software services exporter is required to do this as part of its recent decision to settle for $34 million ( 210 crore) after a federal investigation into alleged misuse of visas.

Infosys was being investigated by various US government agencies from 2011 after a former employee turned whistleblower and claimed that the company was intentionally misusing the business visit visas for sending workers to the US. The company has been investigated by the US Department of Justice and the Department of Homeland Security.

The federal investigation found that Infosys failed to keep proper records relating to the I-9 form, which is mandatory for employers sending staff to US for work. The I-9 forms are documents used to verify the identity and employment authorisation of individuals hired for employment in the US.

Indian software outsourcing companies such as Infosys, Tata Consultancy Services, Wipro and HCL Technologies send thousands of employees to the Americas every year to work on client projects.

The auditor, who will be hired and retained at Infosys' expense, will submit a report to US government authorities regarding the results of the analysis within 60 days of the first and second anniversaries of the settlement agreement. Even though the company agreed to pay $34 million in settlement charges, Infosys which has nearly 15,000 employees in the US, has denied any claims of systemic visa fraud, misuse of visas for competitive advantage, or immigration abuse.

The key point of contention was that Infosys allegedly used cheaper, easy-to-get B-1 visas to circumvent the more expensive and time-consuming H-1B visas for sending employees to the US.
Posted by Accounting & Taxation at 10:38 AM