Budget 2016_Application of the concept of Place of Effective Management (PoEM), Section 9(1) is proposed to be amended, subsection (3A) of section 92CA,
OECD report on Action 13 of the BEPS Action Plan, subsection (7) of section 206AA , Introduction of equalization levy @ 6% 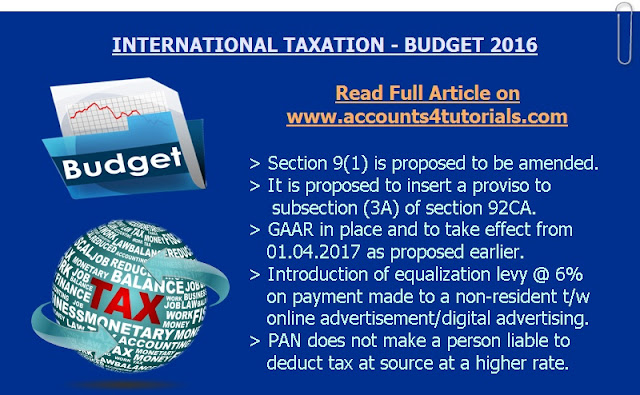 Application of the concept of Place of Effective Management (PoEM) in determining the residential status of a company has been deferred by one year. It will take effect from 01.04.2017 i.e., will be applicable from the AY 2017-18.

Section 9(1) is proposed to be amended to provide that no income shall accrue or arise in India for foreign companies engaged in diamond mining, if the income is from an activity confined to the display of uncut and un-assorted diamonds in any special zone to be notified by the Central Government. It will take effect retrospectively from 01.04.2016 and apply to AY 2016-17.

The provision dealing with certain activities not to constitute business connection in India is relaxed to include fund established/ incorporated/registered in a country or a specified territory notified by the central government. Further, the condition that the offshore fund is not carrying out or controlling and managing, directly or indirectly, any business from India has been dispensed with. It will take effect from 01.04.2017 and will apply from AY 2017-18.

It is proposed to insert a proviso to subsection (3A) of section 92CA to provide that where assessment proceedings are stayed by any court or where a reference for exchange of information has been made by the competent authority, the time available to the Transfer Pricing Officer for making an order after excluding the time for which assessment proceedings were stayed or the time taken for receipt of information, as the case may be, is less than 60 days, then such remaining period shall be extended to 60 days. This amendment will take effect from 01.06.2016.

In line with the recommendations contained in the OECD report on Action 13 of the BEPS Action Plan, the three-tiered (i.e. Master File, Local File and Country by Country (CbyC) reporting) transfer pricing documentation structure proposed to be adopted for specified companies. It will  take effect from 01.04.2017.

It is proposed to amend subsection (7) of section 206AA to prescribe the circumstances where mere non furnishing of PAN does not make a person liable to deduct tax at source at a higher rate. It will take effect from 01.06.2016.

Introduction of equalization levy @ 6% on payment made to a non-resident towards online advertisement/digital advertising, except where such non-resident has a  Permanent Establishment (PE) in India.

Long-term capital gains to non-residents on transfer of shares of company, not being a company in which public are not substantially interested, shall be chargeable to tax at the rate of 10%. With effect from 01.04.2017.

Income of a foreign company on account of storage of crude oil in a facility in India and sale thereof to an Indian resident to be exempt from tax, if it is pursuant to an agreement/arrangement entered into or approved and notified by the central government.