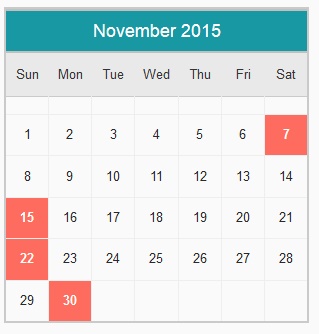 15 November 2015:
​​Quarterly TDS certificate (in respect of tax deducted for payments other than salary) by a person being an office of the Government for the quarter ending September 30, 2015​

30 November 2015:
Annual return of income and wealth for the assessment year 2015-16 in the case of an assessee if he/it is required to submit a report under section 92E​ pertaining to international or specified domestic transaction(s)

30 November 2015:
​​​Audit report under  section 44AB for the assessment year 2015-16 in the case of an assessee who is also required to submit a report pertaining to international or specified domestic transactions under  section 92E​​

30 November 2015:
​​Due date for filing of statement of income distributed by business trust to unit holders during the financial year 2014-15. This statement is required to be filed electronically to Principal CIT or CIT in form No. 64A [As prescribed under Rule 12CA inserted by the Income-tax (First Amendment) Rules, 2015, w.e.f. 19-1-2015.]​