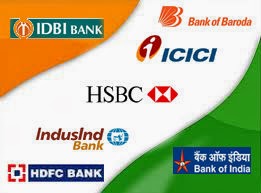 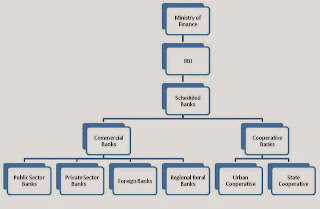 COMMERCIAL BANKS
The main function of these types of banks is to give financial services to the entrepreneurs and businesses. It gives financial to the businessmen like providing them with debit cards, banks accounts, short term deposits, etc. with the money deposited by people in such banks. The commercial banks also lend money to these businessmen in the form of secured loans, unsecured loans, credit cards, overdrafts and mortgage loans. It got the tag of a nationalized bank in the year 1969 and hence the various policies regarding the loans, rates of interest, etc are controlled by the Reserve Banks of India.

Public Sector Banks
These type of banks are operated by the Government. Their main focus is to serve the people rather earn profits. State bank of India, Punjab National bank, State bank of Patiala, Allahabad Bank, etc. are the some of the important examples of Public sector bank.

Foreign banks
These banks have Head Office outside India and branch in India, Besides, the Reserve Bank of India (hereinafter referred to as RBI) acts as the central bank of the country. RBI is responsible for development and supervision of the constituents of the Indian financial system (which comprises banks and non-banking financial institutions) as well as for determining, in conjunction with the central Government, the monetary and credit policies. They are also controlled by RBI.

COOPERATIVE BANKS
Cooperative Banks are governed by the provisions of State Cooperative Societies Act and meant essentially for providing cheap credit to their members. It is an important source of rural credit i.e., agricultural financing in India.

Regional Rural Banks
These are state owned. These banks have been established with a view to developing the rural economy by providing, for the purpose of development of agriculture, trade, commerce, industry and other productive activities in the rural areas, credit and other facilities, particularly to the small and marginal farmers, agricultural labourers and artisans and small entrepreneurs.

Posted by Accounting & Taxation at 4:29 PM