What is Break-Even Point 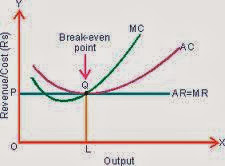 One of the first steps in evaluating a business is determining your break-even point. This is the number of units of your product, which must be sold for income to equal all expenses incurred in producing the merchandise. Logic would dictate that if you are in a high rent area and need to sell half your stock of art objects each month in order to break even, you have started a losing business.

Assuming your product or service is a worthwhile one, the control of your overhead is the key to your profit.

Overhead consists of fixed costs, such as rent, insurance, and payment on bank notes, etc., which will not vary if your production increases. It also includes variable and semi-variable costs. Variables mean such items as commissions to salespeople, purchases of raw materials; and other overhead, which increase in direct proportion to changes in production volume. That is to say, if a company that has been making 10,000 snow shovels per month, for example, doubled production to the 20,000 level, then purchase of raw materials, sales commissions, and other expenses would also increase. Semi-variable costs will vary with volume, but not in direct proportion. The cost of lighting and power will increase with greater production.

Each unit produced should provide some margin for fixed costs and profits. Or expressed a different way, at no point should the direct cost, not the fixed cost, of producing a unit be greater than its sales price. Your fixed cost per unit will vary inversely with changes in volume. Since your fixed overhead will not increase as a result of greater production, and semi-variable costs will increase by a percentage considerably lower than the rate of increased production, it follows that your cost per unit will lessen as greater quantities are produced.The experienced businessman uses his break-even charts to indicate profit margins at a given rate of production. However, the chart is useful only when fixed costs remain the same, when variable percentage can be plotted with reasonable accuracy, and when a company produces only one item.

Break-even is struck at point Q where AR (= Price) = AC = LQ = OP. A firm is just covering its costs as price (= OP) happens to be equal to AC (average cost) = LQ. Equilibrium is at point Q. It is to be carefully noted that the break-even point Q also happens to be the point of firm’s equilibrium where both the conditions of equilibrium are satisfied, viz (i) MC = MR, and (ii) MC is rising.
Posted by Accounting & Taxation at 11:43 PM